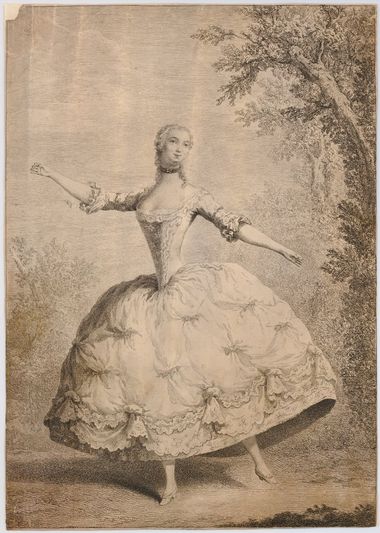 AURETTI'S DUTCH SKIPPER. AKA and see "Dutch Skipper (2)," "Widow's Jigg." English, Jig. G Major (Johnson): B Flat Major (Barnes, Thompson, Vickers). Standard tuning (fiddle). AABB. The tune was first published by David Rutherford in (Daniel) Wright's Compleat Collection of celebrated country Dances, vol. 2 (London, 1742, p. 100), Walsh's Fourth Book of the Compleat Country Dancing Master (London, 1747), Simpson's Delightful Pocket Companion, vol. 2 (London, c. 1750), and in c. 1756 in Rutherford's Compleat Collection of the Most Celebrated Country Dances. Early 18th century London music-seller and music publisher Daniel Wright (whose volumes were republished around 1740 by John Johnson) gave the title as "Widow's Jigg" and "Auretti's Dutch Skipper" as the alternate title, so perhaps the melody was originally called by the former. Nevertheless, "Aurettie's Dutch Skipper" is by far the most frequent name for the jig and commemorates Anne Auretti, a stage dancer in the mid-18th century London with whom the melody is strongly associated (see note for "Auretti's Minuet," for more). A 'dutch skipper' was a type of country dance, in imitation of dances from Holland, and known to the London stage since at least the season of 1709–10, when a 'dutch skipper's dance' was performed by Miss Santlow. The 'Dutch Skipper' was advertised in the Spectator of June 11, 1712, as being one of the entre-act dances performed during a production of the comic Revenge, or Love in a Tub, to be danced by Mr Thurmond and Mrs. Bicknell. "By the 1740's it had become a stage standard for the celebrated Madame Auretti, a dancer from a famous touring family" (Diane Dugaw, Deep Play: John Gay and the Invention of Modernity, 2001). "Auretti's Dutch Skipper" can even be found in a collection of dance music published in 1755 by G. Willsim (who was perhaps from Amsterdam) entitled Recueil de 24 Contredances Angloise Les Plus Usite.

John Gay used the tune as a vehicle for a song in his ballad opera Achilles (1733). The jig was entered into the music manuscript copybooks of London fiddlers Walter Rainstorp (1747, Cheapside) and Thomas Hammersley (1790), as well as Northumbrian musician William Vickers (1770). In recent times the melody can be heard arranged by John Gale in the movie Emma (1996).