Back to Avalon Quickstep

AVALON QUICKSTEP. AKA - "Avalon Quick Step." AKA and see "New Charleston No. 1." American, Reel (cut time). USA, Mississippi. D Major. Standard or ADae tunings (fiddle). AABB (irregular). The melody was first recorded in June, 1930, in San Antonio, Texas, by W.T. (Willie) Namour and S.W. Smith, Mississippi musicians, and named for the hamlet of Avalon, Mississippi (the name Avalon is the mythological isle to which King Arthur was borne after his death). The Avalon area was home to a number of influential musicians, including blues guitarist John Hurt and the string band the Mississippi Possum Hunters, who all knew each other (Narmour and Smith helped Hurt to get signed with the OKeh Records). Apparently, the town was so obscure by the latter part of the 20th century that it could only be located with the help of old maps. The alternate title was an attempt by them to cash in on association to the Charleston dance craze of the 1920's, however, the title was named for the town of Charleston, Mississippi, near where the musicians lived. The 'B' part has ten measures instead of the usual eight. Narmour plays the tune in standard (GDae) fiddle tuning. 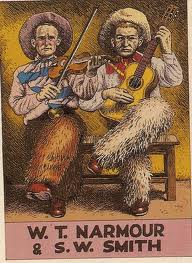 Back to Avalon Quickstep