Find traditional instrumental music
This is the stable version, checked on 19 October 2021.
Jump to: navigation, search

BACK UP AND PUSH [1]. AKA and see "Rubber Dolly." American, Reel. USA, widely known. C Major. Standard tuning (fiddle). One part (Lowinger): AABB (Brody, Silberberg): AA'BB (Phillips): AA'BB' (Reiner). "Back up and Push [1]" was first recorded by the Georgia Organ Grinders in Atlanta in 1929 for Columbia Records. The group was one of the several Skillet Licker off-shoot groups, whose members combined and recombined in different formations for various ventures. The Organ Grinders featured fiddlers Bert Layne and Clayton McMichen, while another Skillet Lickers fiddler, Lowe Stokes, played the organ on this cut (more prominent in the second strain of the tune on the recording). The 1929 session was their only recording date, and they cut six side, all issued by Columbia Records 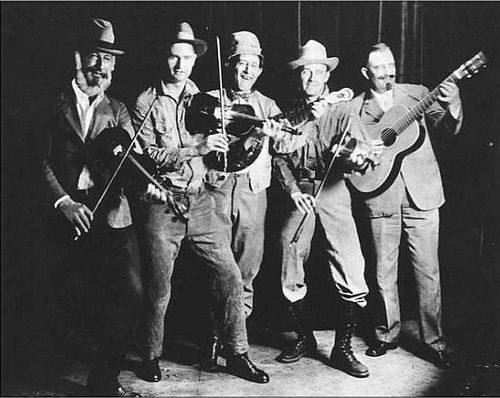 In the photo is Bert Layne, Lowe Stokes, unknown, Clayton McMichen and Claude Davis
A later Skillet Lickers ensemble, led by Gid Tanner, recorded a version in 1934 (backed with "Down Yonder") that became the third best-selling country music record for that year. Gid's son, 17 year old Gordon Tanner, played uncredited fiddle lead at the session, according to researcher Tony Russell. The jazz-influenced tune is now widespread, having been popularized by bands such as Bill Monroe's and Benny Martin's, and influential fiddlers Kenny Baker, Buck Ryan, and others. The second part of some versions is little more than a 'double shuffle' (aka hokum shuffle or OBS/Orange Blossom Special shuffle) on the chords F, C and G.