Find traditional instrumental music
This is the stable version, checked on 28 November 2020.
Jump to: navigation, search

BACON RIND [1]. AKA - "Sal got a Meatskin," "Sal's got a Wooden Leg laid away." American, Reel (cut time). G Major. Standard tuning (fiddle). AABB. The source for "Bacon Rind [1]" is Everett Kays (1905-1996), a fiddler from Lawrenceburg, Anderson County, north-central Kentucky (between Louisville and Lexington). The tune is variously known as "Sal's got a Meatskin" [Roud #4201] or (in the Ozarks) "Sal's got a Wooden Leg laid away," from suggestive lyrics sung to the tune (some more blatant than others). The name "Bacon Rind" may have been an attempt to sanitize the title, but it is hardly less suggestive, for 'bacon rind' was in slang usage in the late 19th/early 20th century to refer to the labia-majora and minora. The name for the tune is also not particular to Mr. Kays, and it was in common use in various parts of the country. Alan Lomax quoted these lines[1]

Sal's got a bacon rind laid away,
To grease Jim's middle leg so they say. 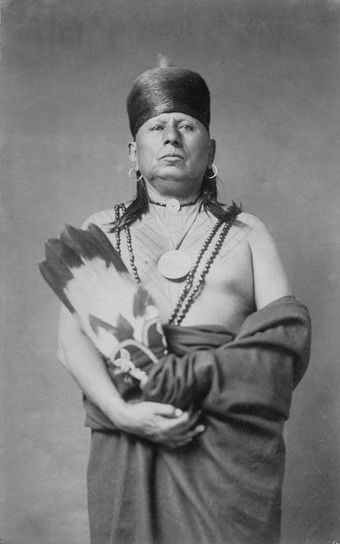 Chief Wah-she-hah/Bacon Rind. It has been claimed that he was the most photographed of all American Indian leaders. He remained a traditionalist in customs, however, and always wore native dress and an otter-skin cap.
The term Bacon Rind was descriptive: it is the tough outer skin of pork or bacon, often used for flavoring. A famous Native-American chief of the Osage tribe, Wah-she-hah (Star that Travels) was also known as Bacon Rind (ca. 1860–1932). He was probably originally from Kansas, but came to Oklahoma during the Osage removal from Kansas in the 1870s. He was an Osage tribal councilman, served as assistant chief in 1904–05, and was elected principal chief in 1912. However he was removed from his office by the Secretary of the Interior a year over a 1906 bribery incident involving an oil lease. Many Osage continued to recognize Bacon Rind as their leader despite his dismissal, and he remained an influential and progressive political leader of the late nineteenth and early twentieth centuries.

"Sal's got a Meatskin" was recorded by the Carlisle Brothers. The Prairie Ramblers' "Bacon Rind (2)," recorded in 1937, is a musically different tune.