Find traditional instrumental music
This is the stable version, checked on 13 May 2022.
Jump to: navigation, search

Back to Balmoral Castle (1) 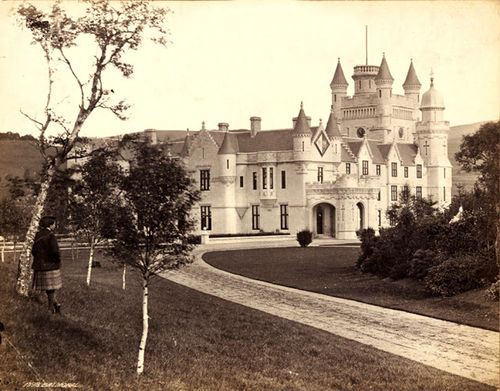 Balmoral Castle c. 1860, the summer residence of the Royal Family.
BALMORAL CASTLE [1]. Scottish, March (4/4 time). A Major. Standard tuning (fiddle). AAB. Composed by J. Scott Skinner after he visited the summer residence of Queen Victoria in Scotland, located between Braemar and Ballater on the river Dee in the Grampians. Hardie (1992) states that the Queen had commanded Skinner, who first gained considerable fame as a dancing master, to include the tenantry of the castle among his pupils. The word Balmoral is said to mean "the house of the laird," the root being the Gaelic baile, a homestead or, later, village (Matthews, 1972). The estate belonged to the Earl of Huntly from the 15th century, and was acquired from the Earl of Fife by Prince Albert and Queen Victoria in 1852 at a price of £31, 500. They demolished the old buildings and built a new castle in the neo-Gothic Scottish baronial style. It was not used much by Victoria after Albert's death, but it has since become a favorite abode of Prince Charles.

Back to Balmoral Castle (1)