Find traditional instrumental music
This is the stable version, checked on 4 April 2020.
Jump to: navigation, search

Back to Banks Hornpipe (1)

BANKS HORNPIPE [1]. AKA- "Banks (The)," "Banks of the River," "Parazotti." AKA and see "Kinloch's Grand Hornpipe," "Morgan's Hornpipe," "Mrs. Taff," "Souvenir de Venice." Scottish, Canadian, Irish; Hornpipe. Canada, Nova Scotia. E Flat Major (Scottish versions, primarily): G Major (Black). Standard tuning (fiddle). AAB (Black, Honeyman, Martin): AA'B (Silberberg): AABB (Brody, Hardie, Hunter, O'Malley, Skinner). "Composed by Parazotti" is an ascription often found attached to this tune, sometimes called a 'descriptive hornpipe', or (by Skinner) a 'Classical hornpipe'. It has become a tune by which good fiddlers are judged by, and as a virtuoso piece is played by fiddlers from several different styles and genres. The composer's origins were somewhat obscure, although he appears to have been a Scotsman of Italian heritage, his grandfather having immigrated to Glasgow. Alburger (1983) stated she could find no composer by that name and suggested it could possibly be a set of a piece which was danced to by Mme Pariot, who retired from the London stage to marry in 1809. Alastair Hardie (1992), however, reports that Parazotti did exist and was actually the grandson of an Italian violinist who settled in Glasgow. The tune was inspired by the sights and sounds of a river in spate. The melody appears first in print in 1881 in Kohlers' Violin Repository (Bk. 1) under the title "Mrs. Taff" (whom Hardie explains was a person who resided on the West coast of Scotland and was Parazotti's patron for a time. It is said she was the owner of the house in which Parazotti composed his tune). The piece is similar to the tune "Souvinir De Venice Hornpipe" in the 1883 Ryan's Mammoth Collection (1883). " "Souvinir" has also been credited to L. Ostinelli, an Italian who arrived in Boston in the year 1818. Michael Broyles references this musician in his book Music of the Highest Class: Elitism and Populism in Antebellum Boston:

He was keenly aware of the reputation the violin had as a vernacular instrument in New England. According to several anecdotes, he was furious when his violin was referred to as a fiddle or when he was requested to play dance music. Once when asked by a lady if he was to play for a dance following a concert, he deliberately cut his violin strings and said 'Veree story, veree story, madam, you see I can no play.'

Ostinelli, of whom little is known, was mentioned in Dwight's Journal of Music in 1859. His lasting claim to fame is his variation which is often used as a finale today by fiddler's playing "The Banks" (Cranford, 1997). The present title, "Banks," is actually the shortened form of the composer's alternate title "Banks of the River" (according to the late Shetland fiddler, collector, teacher and composer Tom Anderson). Scottish fiddler Charles Hardie (1849-1893) was praised by one of the greatest Scottish violinists of his time, J. Scott Skinner, for his rendition of this tune. "The Banks" is one of the tunes sometimes requested of Shetland fiddlers because it is popularly known that "anything composed in a flat key is considered to be a real test of a fiddler's ability" (Cooke, 1986). Skinner himself recorded the tune in the 1920's as part of his "Celebrated Hornpipes" medley. It is also popular in Cape Breton and other parts of Nova Scotia. In Scotland it is traditionally preceded by the slow strathspey "Dean Brig o' Edinburgh (The)."

If one carefully studied the ABC structure of a fairly complete selection of tune variants, one might be expected to arrive at what the original setting the composer intended. It might become obvious how jumbled settings arose from performers not understanding the original intended structure.

But it is obvious that nobody that I know of who has gone into print, or who has attempted to play this tune, actually understood the original intended structure. W.B. Lawrence, in Köhler, has quite a jumbled structure: A, B+A”, A’+A’’’. Scott Skinner has perpetuated this structure, only varying the individual bars in his highly ornamented version, published by Hardie. In Ireland, Coleman and Maguire popularised this jumble. Ryan’s Mammoth Collection has a simpler setting, closer to the original, but which also doesn’t understand the intended structure: he has A, B+A’, B’. He claims Luigi Ostinelli of Boston as the composer, whereas Hardie has the story about Parazotti composing it under Mrs. Taff’s roof. The garbled structure of both Ostinelli’s and Parazotti’s “compositions” is proof enough to me that neither of them was the composer.

The Grier setting attached has the coherence to justify attributing this tune to Morgan, whoever that Morgan was. Some day we may find out. If there were no other reference associating this gentleman with this hornpipe, we might be inclined to say maybe Grier called it after someone he got it from, for example. But there is an oblique reference to our man: John McCarthy of Cappamore, whose manuscripts range from 1876 to 1912, has a very minimal manuscript version of the tune, with structure A, A’ only, but with the title “The Morigan Hornpipe”. The intrusive “i” may be just the way “Morgan” was pronounced, following a similar intrusive “ə” whenever a “g” follows an “r” in Gaelic.

Grier's manuscript page can be accessed in the link, with Fr. Quinn's structure analysis: 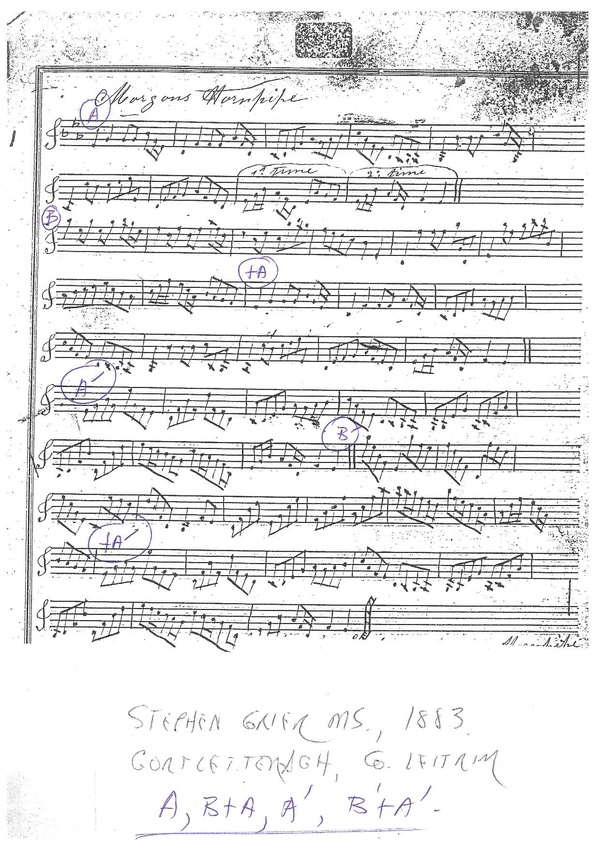 Back to Banks Hornpipe (1)