Find traditional instrumental music
This is the stable version, checked on 26 October 2019.
Jump to: navigation, search

Back to Bannocks of Barley Meal (2)

BANNOCKS OF BARLEY MEAL [2]. Scottish, Air (3/4 time). G Major. Standard tuning (fiddle). AABB. O'Farrell (c. 1805) identifies this tune as "Scotch". Bannock is a Scots word for a type of oatcake or flat round quickbread, which, when cut into triangles, are called scones. 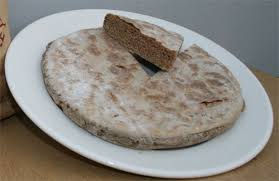 Barley meal has historically been a staple foodstuff for Highland communities.

At the sight of Dumbarton once again,
I'll cock up my bonnet and march amain,
With my claymore hanging down to my heel,
To whang at the bannocks of barley meal.

The tune has similarities to Burk Thumoth's "Tho' for Seven Long Years" and the Irish "Munster Cloak (The)."

Back to Bannocks of Barley Meal (2)