BARBADOES, THE. AKA and see "Only Think of that." English, Country Dance Tune (4/4 time). D Major. Standard tuning (fiddle). AAB. The melody and dance instructions were printed by London publisher John Walsh is his Second Book of the Compleat Country Dancing Master, 3rd edition, 1735, and in subsequent editions of that volume as well as other Walsh publications. It was also published by John Johnson in his Choice Collection of 200 Favourite Country Dances, vol. 3 (1744). 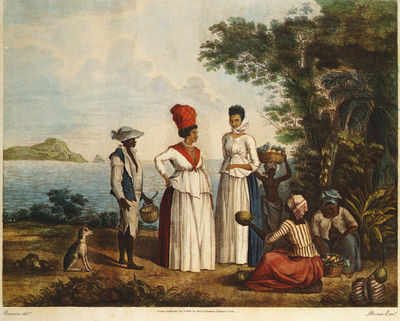 Visted by the Spanish and Poruguese in the 16th century, the island of Barbados and its Kalinago indian population were claimed for England in 1625 by the ship the Olive Blossom, in the name of King James I. A few years later English settlers established a permanent presence on the island, eventually leading to Barbados becoming an English (then British) colony. During its early years the European colony was developed by indentured servents, kidnapped individuals and prisoners from the English Civil War.

The tune was printed in two parts, with slight variations, in 1860 in The Hibernia Collection under the title "Only Think of that." The collection was edited by Patrick O'Flannagan and contained primarily Irish tunes, and was published in Boston by Elias Howe.