Find traditional instrumental music
This is the stable version, checked on 9 August 2020.
Jump to: navigation, search 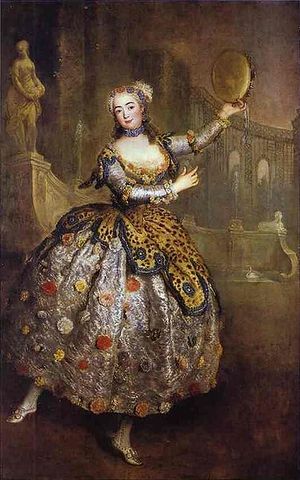 Barbara Campanini c. 1745, with a timbrel, the original name of the instrument.
La Barbarini parlayed her skill and fame into a lucrative contract with the Berlin Court Opera brokered by her admirer (and reputed lover) King Frederick the Great (1712-1786) of Prussia, with the stipulation that she not marry. She broke the contract five years later when she accepted the proposal of Carl Ludwig von Cocceji, son of the Prussian chancellor Samuel von Cocceji. The reaction was swift: Her fiancé went to prison, and Campanini herself was forced to find refuge in London. Undeterred, she returned to Berlin and secretly married Cocceji.

Frederick eventually pardoned Cocceji, and even appointed him district governor at Glogau in Silesia, where the couple lived until they separated in 1759. They divorced in 1788 and she purchased the Barschau estate in Silesia, and was given the title of Countess von Barschau. During her last years, she turned her estates into a charitable institution for impovershed noble ladies.