Battle of the Nile (The)

Find traditional instrumental music
This is the stable version, checked on 16 March 2021.
Jump to: navigation, search

Back to Battle of the Nile (The) 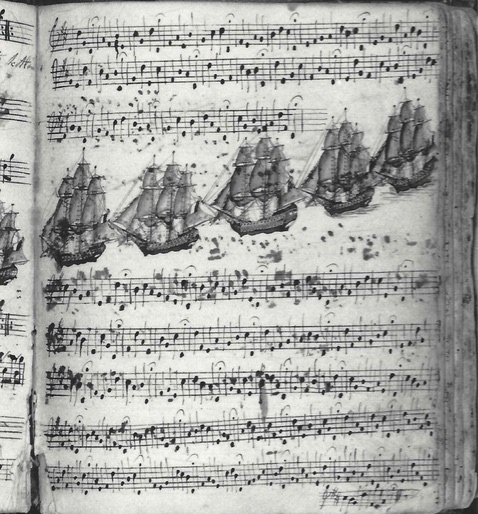 A page from the John Buttery music manuscript collection (early 19th century) showing Buttery's Sketches along with the music for the tune (top of page, 1st part of tune not showing).
BATTLE OF THE NILE, THE. English, Air and March (whole time). D Major: G Major (Cahusac). Standard tuning (fiddle). One part (Cahusac): AAB. The melody, a march and a song air, commemorates Admiral Nelson's 1798 victory over the French fleet under Admiral François-Paul Brueys, anchored in one of the mouths of the Nile river. The battle was fought largely at night, unusual for the time, and resulted in an overwhelming victory for the British. Nelson was made Baron of the Nile as a consequence.

The melody accompanied a song with the title "Battle of the Nile" which was published England soon afterward, and subsequently in Philadelphia (c. 1800, by music publisher J.B. Blake) and Boston (by G. Graupner in 1802[1], and it was referred to in a theatrical playbill around that time in Quebec City, where it was "sung in the character of a Hibernian Tar"[1]


As a march, the tune appears in numerous publications and musicians manuscripts on both sides of the Atlantic, dating to the beginning of the 19th century. Printed publications in which it appears include J. Ball's Gentleman's Amusement Book 3 (London, c. 1815, reprinted in 1830), Paff's Gentleman's Amusement No. 1 (New York, 1812), Oliver Shaws' For the Gentlemen (Dedham, Mass., 1807), and Edward Riley's Flute Melodies, vol. 2 (New York, 1817). The march also appears in the manuscript collections of Dexter Dean (Dedham, Mass., 1800), fiddler Allen Ash (1800-1889, Baltimore, Ontario) and Daniel Henry Huntington (Onondaga, N.Y., 1817).

It also was entered into the music manuscript collections of Joshua Gibbons (1778-1871, Lincolnshire), Rev. R. Harrison (1815, Cumbria), John Buttery (early 19th century, Lincolnshire, No. 727), and Patrick McGahan (1817, Ireland). Buttery, a fifer with the 34th Regiment is likely to have been present at the battle. His manuscript contains sketches of the Egyptian coastline and several ships from the British and French fleets.


Back to Battle of the Nile (The)