Find traditional instrumental music
This is the stable version, checked on 11 October 2021.
Jump to: navigation, search

Back to Beachy Head 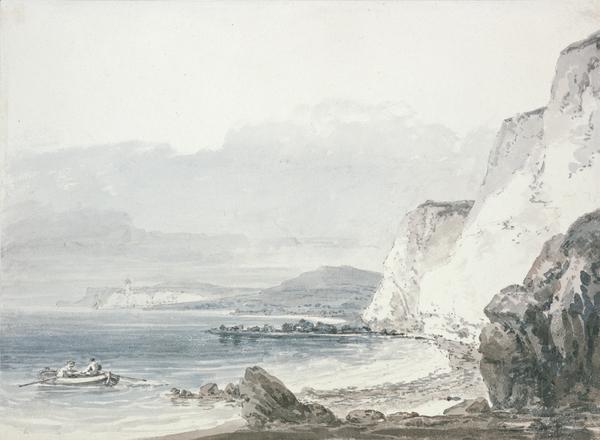 Beachy Head Looking towards Newhaven. Joseph Mallard William Turner, c. 1790's.
BEACHY HEAD. English, Jig (6/8 time). D Major. Standard tuning (fiddle). AABBCC. "Beachy Head" is a jig contained in a small volume of original tunes entitled A Collection of Country Dances and Waltzes (c. 1797), composed anonymously by "A Young Lady", however, according to a Ms. note on the Royal Academy of Music Library copy, the composer was a Miss Newberry. Since many of the titles are named for Sussex and its locales, it can be assumed Miss Newberry was a resident of the county.

Beachy Head is the name of is a chalk headland in East Sussex, England. It is situated close to Eastbourne, immediately east of the Seven Sisters. In 2010, it was the third most common suicide spot in the world, after the Golden Gate Bridge in San Francisco and the Aokigahara Woods in Japan, according to The Wall Street Journal. To mitigate this situation there are regular patrols of the cliffs.

Back to Beachy Head