Back to Beckford's Election[edit]

BECKFORD'S ELECTION. English, Country Dance Tune (whole time). B Flat Major. Standard tuning (fiddle). AABBCC. The title probably references the election of William Beckford [1] (1709–1770) to the office of Lord Mayor of London in 1769, he second election to the position (the first was in 1762). Beckford was born into Jamaican plantocracy but spent most of his adult life in London serving in various political offices, rising to become a crusading Lord Mayor who even defied King George III. 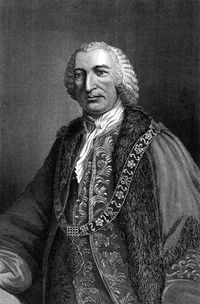 He was also reputed to have been the wealthiest man in England of his time, with extensive holdings in the cloth industry, property, government bonds, and sugar plantations. Beckford was renowned as a fiery speaker who at one in the same time upheld the historic liberties of Englishmen, even while defending the colonists' right to enslave.

His son, also William Beckford [2] (1760-1844), the "Fool of Fontill", inherited his wealth and was in interesting character in his own right.

Back to Beckford's Election[edit]