BELLAMIRA. AKA and see "Balk (The)." English, Country Dance Tune (2/2 time). G Minor. Standard tuning (fiddle). AAB. The country dance and tune were first published in the seventh edition of John Playford's Dancing Master (1689, third supplement 'C'), and remained in the long-running series through the 18th and last volume, printed in London in 1728 by John Young (heir to the Playford publishing enterprise). "Bellamira" also appears in John Walsh's Compleat Country Dancing Master, editions published in 1731 and 1754. 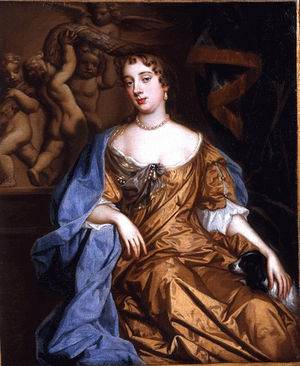 Bellamira, or The Mistress was the title of a comic play written by Sir Charles Sedley, produced in London in 1687, probably at Drury Lane Theatre. Not only was the play comic, it was quite risque, as the principle character, a merchant's daughter turned courtesan, was popularly supposed to have been a depiction of Barbara Palmer [1] (1640-1709), 1st Duchess of Cleveland, Countess of Castlemaine, mistress to Charles II until he tired of her (but not before she bore him five of her six children). Her extravagance, foul temper and promiscuity provoked diarist John Evelyn into describing her as the "curse of the nation", whereas Samuel Pepys often noted seeing her, admiringly.