Find traditional instrumental music
This is the stable version, checked on 2 August 2020.
Jump to: navigation, search

Back to Bessie Bell and Mary Gray

BESSY BELL AND MARY GRAY. AKA - "Bessie/Bessy Bell," "O Bessy Bell." Scottish, English; Air and Jig. D Major or Mixolydian. Standard tuning (fiddle). AABB. The jig was included in Henry Playford's 1700 collection of Scottish dance tunes (set in major mode), in Orpheus Caledonius, and other publications. In Thomson's Orpheus Caledonius (1725), first edition, it is credited to David Rizzio, who was Queen Mary's secretary and a lutenist and singer of repute, but in the second edition the ascription was removed. It is unclear whether he was in fact the author of the tune. John Gay's uses the melody in his Beggar's Opera (1729) where it appears as the vehicle for the song "A curse attends that woman's love," a parody of the original lyric. The tune was used as an early vehicle for the song "Vicar of Bray (The)," as published in Walsh's British Musical Miscellany (vol. I, 1734). Kidson calls it a "quite unvocal and inappropriate tune" for the song, and that the words to "Vicar" were more appropriately set to the melody "Country Garden(s)" late in the 18th century. The title is that of a well-known ballad, recorded in modern times by Martin Carthy (on his album "Shearwater") and Steeleye Span, to name a few. The words to the song go, in part:

O Bessie Bell an' Mary Gray!
They were twa bonnie lasses,
They biggit a bower on yon burn-brae,
An' theekit it owre wi' rashes.

They theekit it owre wi' rashes green.
They happit it roun' wi' heather;
But the pest cam' frae the Burrow-toun
An' slew them baith thegither.

Tradition has it that Bessy Bell and Mary Gray [1] were young women, daughters of local Perthshire gentry, who attempted to escape the plague ravaging the countryside in the year 1645. It had begun in the south and gradually spread northward, crossing the border to ravage first Kelso and then Edinburgh. By August of the year it had reached Perth, where more than 3,000 people died, straining the limits of the towns resources so much that many of the corpses were left to rot in the streets. Numerous of the more well-to-do of the region fled to the countryside, hoping to ride out the contagion in the comparative safety of the rural areas. 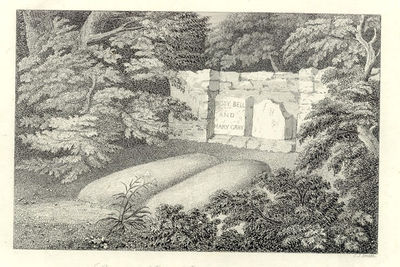 Mary and Bessy fled to a cottage or 'bower' located a mile from Lynedoch House, the home of Mary Gray. They were visited on occasion by a youth of their acquaintance, a lover of Bessie's, who brought them food and other supplies from the town of Perth. On one of his visits he brought his love a token, a lace handkerchief or a string of pearls, that he had obtained from the corpse of a plague victim. Bessy soon took ill, and in nursing her, so did Mary. They died in each others arms. Unfortunately, their bodies were not admitted to either the town or to family plots because of the plague and they were left as they lay. Later, after the plague subsided, they were buried together. Later the gravesite was improved with iron railings and a large stone, on which was carved: "They lived, they loved, they died."

Nigel Gatherer relates that after the death of the pair a ballad was written that was adapted by Allan Ramsay, John Leyden (who worked with Walter Scott, and moved the scene of the story to the Borders) and James Duff of Logiealmond. It appears in Francis Child's great work The English and Scottish Popular Ballads as ballad number 201, and earlier appeared in Charles Kirkpatrick Sharpe's A Ballad Book. Incidentally, says Gatherer, there are two hills named Bessie Bell and Mary Gray (respectively) in County Tyrone, Ireland, and another two hills supposedly of the same name outside Staunton, Virginia, in the United States.

John Adams, of the Village Music Project, relates that the pairing of Bessy and Mary was adapted to another folk tradition, having to do with old working class customs. The following rhymes were sung by 19th century Derbyshire Mill girls as part of the annual ritual breaking of the holiday, states Adams, as the locked the master and mistress out of their mill, and still singing the song, would not "release" them until the holiday was granted.

Betsy Bell and Mary Gray were saucy kissable lasses
They built a bower near yonder tower and covered it with rushes
Twenty pins have I to go, let ways be ever so dirty
Never a penny in mi purse but farthings five and thirty.

Back to Bessie Bell and Mary Gray