Back to Big Bully

BIG BULLY. American, Country Rag/Reel. C Major. Standard tuning (fiddle). One part. The tune is from a March, 1936, recording session for Decca Records in New Orleans by the Stripling Brothers, Charlie (1896-1966) and Ira (1898-1967), from Pickens/Lamaar counties, west Alabama. They were encouraged by the record company to do original numbers or ones not recorded before, but their "Big Bully" title seems to indicate a willingness to capitalize on the success of "Bully in the Town," a popular 1926 recording by the north Georgia group The Skillet Lickers and others. "Bully of the Town," however, was a composed song by Charles E. Trevathan in 1895 for the New York stage show The Widow Jones. 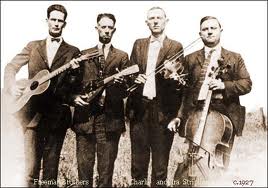 Charlie and Ira Stripling (r.) with the Freeman Brothers

Back to Big Bully