Birks of Abergeldie (The)

Back to Birks of Abergeldie (The) 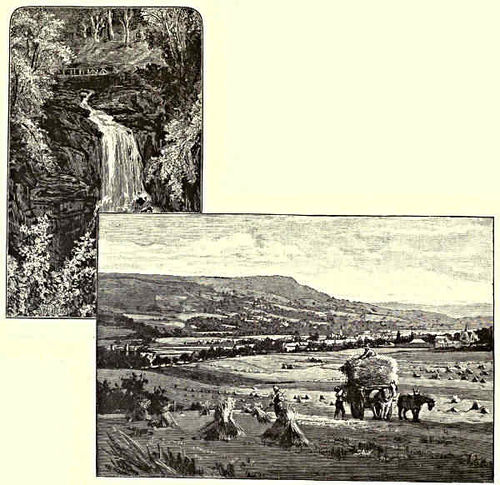 Birks of Aberfeldy; Aberfeldy from the West

The usual meaning of the Scots word birk is of a birch tree, or a small wood of birch trees. In this case, the 'birks of Abergeldie' (or Aberfeldie) is a placename in Perthshire, Scotland. The tune appears Northumbrian musician Henry Atkinson's 1694-5 music manuscript collection [1] (as "Aber Geldy"), in a notebook of six pages of country dances called the Holmain Manuscript (1710–50), and in Walsh's Third Book of the Compleat Country Dancing-Master (1735). Somewhat later it appears in Bremner's 1757 collection (p. 35), the Caledonian Pocket Companion of 1760, and the Gillespie Manuscript (1768). The tune was published by Henry Playford in his Dancing Master of 1690 under the title "Scotch Ayre (A)" (it also appears in later editions), and later republished in his 1700 collection of Scottish dance tunes under the title "The Berks of Abergelde." In the Sinkler MS (1710) it can be found as "Birks of Ebergeldie" and in Northumbrian musician Henry Atkinson's 1694 MS it is simply "Abergeldie." As with many fashionable tunes it attracted other titles: London publishers Charles and Samuel Thompson included it in their Compleat Collection of 200 Favourite Country Dances, vol. 2 (1765) under the title "De'els Dead (The)" (from a song of that name), and it was printed by Daniel Wright in his Compleat Collection of Celebrated Country Dances (1740) as both "Berks of Abergelde" and "Cast a Bell"; and as "Bonnie Lassie Will You Go" in the Scots Musical Museum, vol. 2 (1788).

Poet Robert Burns set lyrics to the melody inspired while standing under the Falls of Moness on a 1787 Highlands excursion with his friend William Nicol. He adapted the chorus of an older song, a lover's dialogue, called "Birks of Albergedie," printed by David Herd (1776) and others, beginning "Bonnie lassie, will ye go", and authored other parts. Burn's version was printed in Edinburgh in James Johnson's Scots Musical Museum (vol. 2, 1788, No. 113). Herd's song begins:

Hecht points out that the songs "I will kiss your wife, carl" and "Some say the deal's dead" are set to the same air, the music of which evolved in later editions of the Museum.

The classical composer Franz Joseph Haydn fashioned an arrangement of the tune, although Purser (1992) is of the opinion that his effort fails, as do those of other non-Scottish classical composers of the time who try to set Scottish music: "...it seems that they gild lillies with great skill, intrusive harmonies, and foolishly fussy harpsichord accompaniment."

Back to Birks of Abergeldie (The)