Back to Black Jack Grove (1)

BLACK JACK GROVE [1]. AKA - "Blackjack Grove." Old-Time, Breakdown. USA, Kentucky. A Mixolydian ('A' part) & A Dorian ('B' part) {Phillips, Titon}: A Mixolydian ('A' part) & A Major ('B' part) {Silberberg}. Standard or AEae (McNew) tuning (fiddle). AB (Silberbert): AABB (Phillips, Titon). Phillips notes that his source, Walter McNew, tended to blur the 'C' notes in the 'B' part of his unaccompanied version, resulting in a tonality somewhere between minor and major. Jeff Titon (2001) finds the title in tune lists from Berea College in 1915 and in the 1919 Berea fiddle contest list. The title presumably takes its name from a locale with a grove of blackjack oak trees. 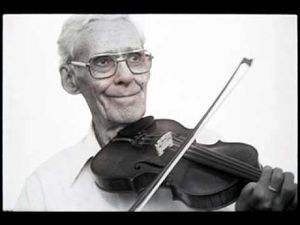 McNew learned "Black Jack Grove" from his father John McNew (b. 1888), a telegraph operator and depot agent for the L & N Railroad, who would play his fiddle between dispatches during the graveyard shift at his train depot. Walter learned the tune from his father, and thought that his father in turn had it from a man known to the family as 'Uncle' Garrett Bow, who used to visit with the elder McNew at the train depot where the two would swap tunes through the night [1] McNew was also highly influenced by neighboring Madison County, Ky., fiddler Doc Roberts, whom he knew and held in awe.


See also listing at:
Hear McNew playing the tune (recorded by Steve Green July-August 1992 in Rockcastle County, Kentucky) at the Digital Library of Appalachia [1], Slippery Hill [2], and at Berea Digital Content [3]
Hear/see fiddler Kenny Jackson play a version of the tune on youtube.com [4]

Back to Black Jack Grove (1)