BLACKWELL HALL. English, Country Dance Tune (6/8 time). D Major. Standard tuning (fiddle). AABB. The tune was first published in 1710 in the Second Volume of the Dancing Master [1], 1st edition, published in London by John Young, heir to the Playford publishing concerns. It was retained through subsequent editions until the last, published in 1728. The country dance was also published in Walsh & Hare's Second Book of the Compleat Country Dancing-Master (London, 1719). 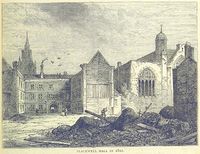 Blackwell Hall [2], or the older name Bakewell Hall, was London's cloth market, held weekly, where provincial clothiers and manufacturers would come to sell their wares for larger markets, and it became the most important venue for the cloth trade in England. The business at Blackwell Hall was taken over by middlemen, called factors, in the 17th century, much to the dismay of clothiers and manufacturers who protested they could not buy and sell themselves. Parliament sympathized with them and passed legislation to regulate the trade, but it was relatively ineffective. Blackwell Hall was built and rebuilt several times, as in 1672 after the Great Fire in London.