Find traditional instrumental music
This is the stable version, checked on 14 August 2019.
Jump to: navigation, search

Back to Blenheim House (1)

BLENHEIM HOUSE [1]. English, Country Dance Tune (4/4 time). D Major. Standard tuning (fiddle). AAB. The melody appears with dance figures in publisher John Walsh and P. Randall's Twenty Four New Country Dances for the Year 1711 (London), a volume "Humbly Dedicated to ye Honourable Henry Ld. Neuport." The tune is attributed to dancing master Nathaniel Kynaston (1683-1757). Although very little is known about him, Kynaston appears to have been active from 1705 to about 1722 in the Shropshire/Wales border area. The Selattyn parish register in Shropshire records that a "Nathanial Kynaston, gent., & Mrs. Elizabeth Davies, both of Oswestry" married on August 25th, 1719-although whether this was the dancing master is unknown. Kynaston appears to have been a not uncommon name in Shropshire, and the family includes Sir Humphrey Kynaston, a notorious 16th century highwayman and Robin Hood figure, who preyed on the wool merchants of Shrewsbury. The melody is dated 1710. 120 of Kynaston's melodies and dances appear in the surviving Walsh volumes (John Walsh was a London publisher of country dances from 1705; his son, also John Walsh, took over the business and continued publishing until his death in 1766). 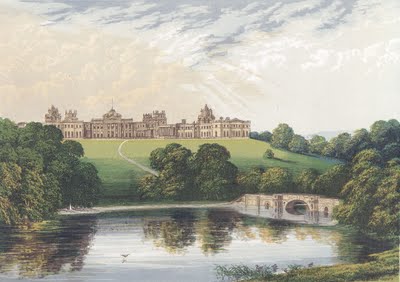 Blenheim House [1] (or, Blenheim Palace), Woodstock, Oxfordshire, was the opulent residence bestowed upon John Churchill, First Duke of Marlborough, in reward for his famous victory over the French at Blenheim, in Bavaria, during the reign of Queen Anne (1704). It was designed by the most celebrated architect of his day, Sir John Vanbrugh, and constructed between 1705 and 1722. Littleton's "Blenheim" goes:

When Europe freed confessed the saving power
Of Marlborough's hand, Britain, who sent him forth,
Chief of confederate hosts, to fight the cause
Of liberty and justice, grateful raised
This palace, sacred to the leader's fame. ..... [Brewer, Dictionary of Phrase and Fable, 1898]

Back to Blenheim House (1)