Find traditional instrumental music
This is the stable version, checked on 17 March 2020.
Jump to: navigation, search

BLOOMINGDALE WALTZ. American, Waltz. A Major ('A' and 'B' parts) & D Major ('C' part). Standard tuning. AABBAACAA. "Bloomingdale Waltz" was composed and published in 1829 by New York musician Michael Higgins in his Original Dances, Waltzes & Hornpipes for the Violin (1829, p. 10). The waltz was found in the music manuscripts of Long Island painter and fiddler William Sydney Mount (1807–1868). The title predates New York's famous Bloomingdale department stores, founded in 1861, but does refer to the district in New York City once known as Bloomingdale, the name given to the farms and houses along the Bloomingdale Road along Manhattan's Upper West Side. The name 'Bloomingdale' derivies from the Dutch name Bloemendaal, Anglicized to "Bloomingdale" or "the Bloomingdale District." Bloomingdale Road's name was changed to The Boulevard in 1868, as the district gradually was absorbed into the city. 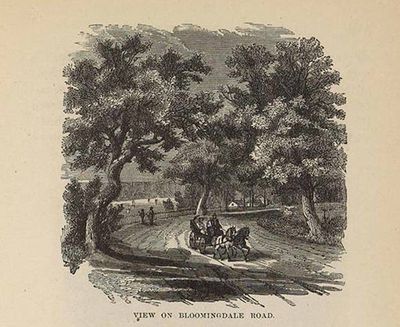