Back to Boating Up Sandy (6)

BOATIN' UP SANDY [6]. American, Reel (cut time). A Mixolydian. Standard tuning (fiddle). ABCCDEE. A modal tune from the playing of Bath County, Kentucky, fiddler George Lee Hawkins (1904-1991). The tune is idiosyncratic to Hawkins and uniquely structured. The parts are almost improvisational for the first half, but each line always ends on the exact same last measure for the cadence. About half-way into the piece he introduces his 'Part C', a strain which is then alternated with other parts for the rest of the tune, although it too is varied somewhat. He never returns to themes introduced in the first two parts, and does not repeat any sections of the tune exactly the same, save for the aforementioned last bar of each line. 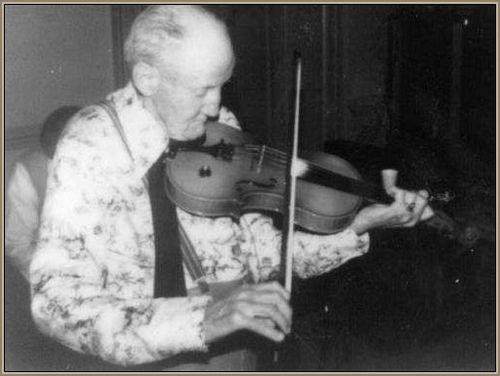 Hawkins had lyrics to "Boatin' up Sandy," but did not sing them on the version included on Rounder 0376, however he did recite them for his 1977 field recording for recordist John Harrod.

Way down yonder boating up Sandy,
Red top boots and a quart of good brandy;
Some like chicken foot, I likes the liver,
I loves the pretty girl who lives on the river.
Sometimes drunk, sometimes boozy,
Old Johnny Huckleberry a-hugging his Susie.

Hawkins married in a local girl named Jennie Crouch Emmons (b. 1907) in 1923, who, is remembered by the family as a talented musician who played guitar, organ, fiddle, piano and banjo, and her organ remained with members of the family into the 21st century. Tragically, she died in 1943 in childbirth along with her son. Hawkins had been devoted to her and never remarried. Late in life Hawkins developed Tuberculosis and was in and out of Sanitorium. His granddaughter, Jackie Huller, posted this poem [1] by Hawkins written in 1957 during one of his Sanitorium stays:

Early in the month of June
with fiddle to chin I played a tune
As the music filled the air
it caught half on a maiden so fair
Her bright red cheeks and dark curly hair
Her brown eyes sparkled as she played the guitar
I listened carefully with an artistic ear
to the songs she'd sing seemed to draw us near
The Day was bright a Sunday in June
the lilac bush was in bloom
It's sweet fragments filled the air
Blended with music and a true love affair
This courtship started in the month of June
in 1920 by a silver moon.
We played sweet music as time went by
for in 1923 she became my bride
the memory of lilacs under a golden moon
remind me of an old fiddle tune
the one I played that Sunday in June.
Many years have passed since that Sunday in June
where two hearts met under lilacs of blue
She sleeps now beneath the sod in a silent cemetery
Her name Jennie C. ingraved on a tombstone
for a memory in the year of 1920
A Sunday afternoon in June a true love
was united that Death could only part
the homestead is gone and the lilac bush
so is the fair maiden I love so true....

Back to Boating Up Sandy (6)