Back to Bob Taylor's March 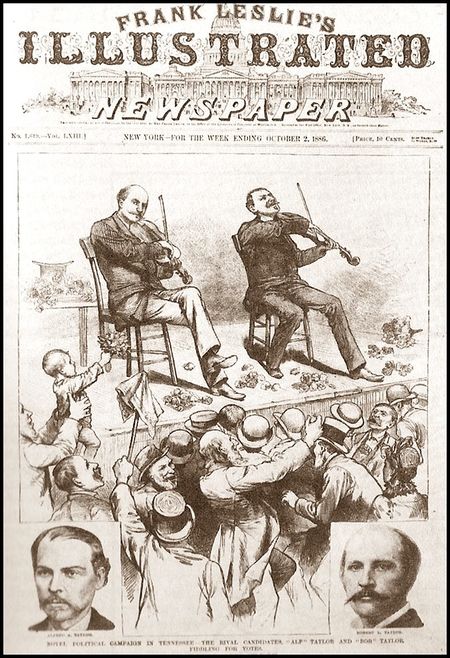 Cover of the October 2, 1886 issue of Frank Leslie's Illustrated Newspaper, showing Tennessee brothers and gubernatorial opponents Robert Love Taylor and Alfred A. Taylor entertaining a crowd during a campaign rally.
BOB TAYLOR'S MARCH. American, March (3/4 or 6/8 time). USA, Tennessee. D Major. Standard tuning (fiddle). AAB. The melody comes from Bob Taylor, who, along with his brother Alf, was both a fiddler and a Governor of Tennessee. The brothers, who belonged to different parties, were friendly rivals and would even share a bed while out campaigning against each other (they were each in office at different times). The Taylor vs. Taylor campaign of 1886 was so amicable, in fact, that it was called "The War of the Roses." Bob Taylor's original name for the tune may have been "Streaking Old Fiddle," a favorite tune of his. Fiddlin' A story goes that while Bob was Governor he attended a fiddle contest in Memphis and competed with a young Fiddlin' John Carson. Taylor won, but when time came to award the prize he stepped forward and told the assembly that he believed the judges had bestowed the prize upon him only because he was the Governor of the state. He said he could never hope to play like Fiddlin' John, and so declined the award. (attributed to Collier: "Fiddlin' John on Broadway", quoted by Gene Wiggins: Fiddlin' John Carson, His Real World and the World of this Songs {1989}). Another account of the contest (attributed to Radio Digest of November 7th, 1925, reprinted in Mark Wilson's notes to Rounder LP1003 Fiddlin' John Carson) goes:

.....Young Carson was declared winner and thereafter became known as Fiddlin' John, while Governor Taylor was so delighted with the young fellow's playing that right there on the spot, he bestowed his fiddle on the proud victor.

John Carson became a friend of Bob's and used to campaign with him, fiddle in hand.

Back to Bob Taylor's March