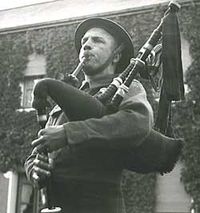 BOBBY CUTHBERTSON. AKA – "Bobbie Cuthbertson." Scottish (originally), Canadian; Hornpipe. D Major. Standard tuning (fiddle). AA'BBCCDD. A pipe hornpipe by John Wilson (1906–1979), a champion Scottish piper who emigrated to Ontario, Canada, in 1948. The tune honors Scottish dancer Robert McNiven Cuthbertson (1906–1979), a native of Springburn, Glasgow, Scotland, who won his first dancing championship in 1913. The pipe setting is straight mixolydian, although Cape Breton fiddler Fitzgerald flatted some of the 'c' notes in the second and fourth part. Christine Martin (2002) notes that "Bobbie Cuthbertson" is the most popular vehicle for solo hornpipe dancing in modern Highland dancing competitions (the rhythmic "bounce" of the dance is musically described in the last strain of the hornpipe).

Just as his dancing career was starting to mature, World War I intervened and Cuthbertson joined the Argyll and Sutherland Highlanders, later serving with the Gordons. He continued to dance in the war in his leisure time and for army sponsored competitions (he won the championship of the 51st Division, the Canadian Brigade Medal and the Army Championship). Cuthbertson survived the war and continued dancing and teaching, producing many great dancers of the next two generation. He continued his work into the 1950's. Piping and Dancing (October, 1935) said of him: 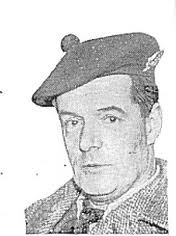 In action (if such a phrase can describe Bobby Cuthbertson), he is the embodiment of graceful ease that, combined with a mathematical precision, makes dancing look an effortless accomplishment, which can be acquired by anyone, is unquestionably the hallmark of supreme ability. We doubt, if there has ever been such an able dancer in Scotland, and we believe it will be may a long day before we see his equal, and we do not think we will ever see his master.

His teaching prowess was recorded in this passage from Charlie Mill, a prominent Scottish Dancing judge a student of Cuthebertson's:

I recall my first class—I walked into his Glasgow studio and sat with about 10 other dancers of varying ages—and every one of them a champion dancer (Catriona Buchanan, Margaret Sampson, etc.) or a prominent prizewinner on the games circuit. He taught one at a time, placing each dancer between the backs of two wooden chairs on which sat two pupils to stop the chairs from moving. He stood behind you and you faced the mirror- so he could see your "front and back" at the same time. All the time, he was asking questions of all dancers at the class on the practical and theoretical side of Highland Dancing—keeping them all involved and alert! He'd put up 2 or 3 of us at a time to perform steps and dances and accompany us on his own set of pipes—only they were what is known in the piping world as a quarter set—a miniature version of the pipes with a quarter of the volume! I recall he would hold the mouthpiece in the left side of his mouth, puff on a cigarette which was in the right side of his mouth, and shout to us every now and again out of the centre of his mouth!! I spent about 6 years with Bobby and my dancing improved to the point that during my teenage years, my twenties and half my thirties I attended Highland Games and usually ended up with most of the prizes and overall trophy. So there's no doubt that Bobby was an excellent teacher-both practically and theoretically.