Back to Bonnie Blue Flag (The)[edit]

BONNIE BLUE FLAG. AKA and see "Coleman's March (2)," "Whistle on Your Way." American, March and Song Air (6/8 time). USA; Alabama, Pa. G Major. Standard tuning (fiddle). AB (Bayard): AABB (Kerr, Sweet). A popular Southern Civil War composed song and show tune that quickly became the national anthem of the Confederacy and later entered fiddle and dance folk repertory (especially through discharged soldiers). Besides being an anthem, it was also used as a march air in the Confederacy and, after the war, in other areas of the country (such as southwestern Pennsylvania for one) in martial (i.e. fife and drum) repertory. Samuel Bayard (1981) states it was a favorite in that region of Pennsylvania, although its Southern origins were not always known. Some editors, such as Sigmund Spaeth in History of Popular Music in America, have claimed this tune is derived from a 6/8 time Irish air "Irish Jaunting Car (The)," although that ditty is also sung to other melodies. Others do not see the connection, and Paul Wells, for one, seems to think a more likely candidate for origins of "Bonny Blue Flag" is the Irish tune "Wearin' o' the Green." It was the repertory of northwest Alabama fiddler D. Dix Hollis, as listed in the Opelika Daily News of 4/17/26. The chorus refers to the official flag of the Confederacy:

O'Neill (1922) says: "Not less popular that "Johnny I hardly knew ye" in the North, was 'The Bonnie Blue Flag', the Southern National Air, which was to the boys in grey what 'Yankee Doodle' was to the boys in blue. In Adair Fitzgerald's Famous Songs we are told the words of 'The Bonnie Blue Flag' were written in 1862 by Mrs. Annie Chambers Ketchum to an Irish melody adapted or composed by Henry McCarthy. After a fruitless search in several old time collections for the now very rare strain it is presented as noted from the author's memory." 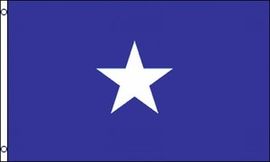 The Bonnie Blue flag is not the most famous flag of the Confederate States, but was one of the earliest. It was actually created several decades prior to the Civil War, in an earlier rebellion of American settlers in Florida.

It was created by Melissa Johnson, sister-in-law of Major Isaac Johnson, commander of the West Florida Dragoons. In September 1810, settlers in the Spanish territory of West Florida revolted against the Spanish government and proclaimed an independent republic. The Bonnie Blue Flag was raised at the Spanish fort in Baton Rouge on September 23, 1810. On December 6, 1810, West Florida was annexed by the United States and the republic ceased to exist, after a life of 74 days. {Sons of Confederate Veterans Robert E. Lee Camp #16} [1]

The flag was revived when the state of Mississippi seceded from the Union in January of 1861, and flew from the state capitol building in Jackson. It was also the flag that flew from the Confederate artillery batteries that fired the first shots of the war at Fort Sumter in Charleston harbor. The Bonnie Blue Flag remained the unofficial flag of the secession for several months in 1861, until supplanted by the more familiar official flags and battle flags.

Back to Bonnie Blue Flag (The)[edit]