Back to Bonnie Polka (Da) 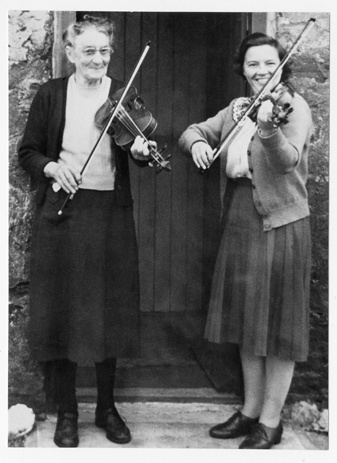 Additional notes
Source for notated version : - Tom Anderson obtained the polka from the playing of fiddler Jean Pole o' Waas (of Stove, Walls, Shetland), who was born in 1880. The Shetland Times[1] gave this brief sketch of her at at 2016 unveiling of a carved headstone for her and her family:

Jean Pole was born at Stove, Walls, in 1880 and lived there with her family. Her father, Tammie, a seaman and sometimes whaler, played the fiddle and both Jean and her younger sister Clemmie taught themselves to play at an early age. The sisters even made themselves simple fiddles when they were about eight years old. Unusually for that time, Jean, from the age of about 18, played at dances and weddings. Sadly, in her late 30s, her younger sister Clemmie died. Two years later her brother Tammie (a photographer) also died just weeks after their father. Jean then had to assume the family responsibilities – including her disabled older sister. She kept house but was also an early pioneer of women carrying the post.

While her public playing stopped, she still enjoyed playing with friends and neighbours passing on tunes, local variations and the traditional style of playing. Tom Anderson was a frequent visitor and famously she taught him "Da Hens’ Mairch Owre da Midden" which she called "Da Chickie Reel". Several tunes still bear her name.

Back to Bonnie Polka (Da)