Bound to Have a Little Fun

Back to Bound to Have a Little Fun[edit]

BOUND TO HAVE A LITTLE FUN. Old-Time, Breakdown. G Major. Standard tuning (fiddle). AA'BB'. The tune was popularized by the playing of Kentucky fiddler Bruce Green, who learned it from Gusty Wallace. Gustace "Gusty" Wallace was born in Hart County, Kentucky, on November 24, 1890, but lived in Metcalf County, Kentucky, when Bruce Green visited him in the 1970's. Wallace claimed it was the first tune he ever learned, and that he had it from his father, Adison Wallace. The second strain contains twelve measures instead of the usual eight. 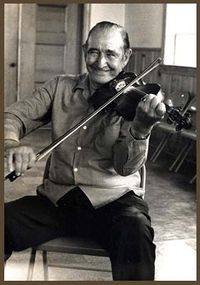 There is a brief biographical sketch of Wallace by Bruce Green in Fiddler Magazine [1], Summer, 1997.

Back to Bound to Have a Little Fun[edit]