Find traditional instrumental music
This is the stable version, checked on 10 October 2019.
Jump to: navigation, search

Back to Braes of Ballochmyle (The)

BRAES OF BALLOCHMYLE, THE. Scottish, Air (whole time). G Major. Standard tuning (fiddle). AB. The name of a song written by Robert Burns in 1785, on the occasion of "the amiable and excellent family of Whitefoord's leaving Ballochmyle," when the failure of Sir John's Ayrshire bank bankrupted him and obliged him to sell the estate. The 'Maria' named in the first stanza was said to be Mary Anne Whitefoord, Sir John's daughter, later Mrs. Cranstoun. The property was purchased by Claude Alexander, Esq., for whose sister Burns penned "Bonnie Lass o' Ballochmyle (The)." Burns's poem begins: 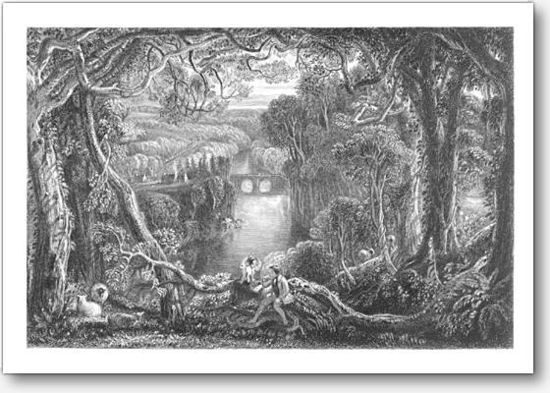 A fanciful c. 1870's print of the Braes of Ballochmyle.

The Catrine woods were yellow seen,
The flowers decay'd on Catrine lea,
Nae lav'rock sang on hillock green,
But nature sicken'd on the e'e.
Thro' faded groves Maria sang,
Hersel' in beauty's bloom the while;
And aye the wild-wood ehoes rang,
Fareweel the braes o Ballochmyle!

The braes of Ballochmyle extend along the right or north bank of the Ayr, between the village of Catrine and Howford Bridge, about two miles from Burns's farm of Mossgiel.

Back to Braes of Ballochmyle (The)