Bridge of Garry (The)

Back to Bridge of Garry (The)

BRIDGE OF GARRY, THE. Scottish, Reel. A Major. Standard tuning (fiddle). AAB (Gow, McGlashan): AABB' (Kerr, Stewart-Robertson). The bridge of Garry is "at Struan," notes McGlashan. It was built around the year 1720 and replaced in 1833. 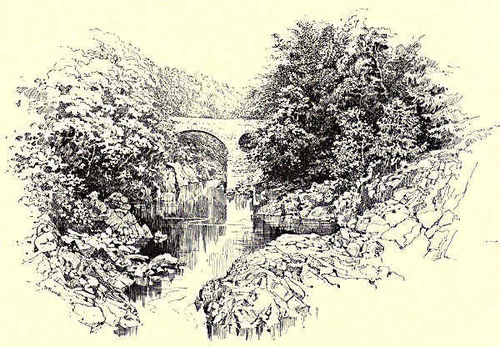 The Bridge of Garry
"The Garry leaves its parent lake high up near the borders of Inverness, and tumbles in white foam through leagues of the “Struan country,” between banks thinly sprinkled with birchwood and edging great tracts of moorland" [The Rivers of Great Britain, 1889].

"The Bridge of Garry" was composed by John Crerar (1750-1840), who lived near Inver, Perthshire, and was a contemporary of Nathaniel Gow. Elizabeth Stewart gives this sketch of the composer in her Dunkeld an Ancient City (1926):

John Crerar, whose descendants are still in Dunkeld, was a keeper on the Atholl estate, and his features are familiar to many who do not know his name. He is depicted in the picture by Landseer, "Death of a Stag in Glentilt," as looking through a telescope. He was born near Dunkeld in 1750 and died at the age of 90 at Polney. Composing as well as playing, three of his tunes, "Forest Lodge," "The Bridge of Garry," and "Banks of Garry (The)," were published in M’Glashan’s second "Collection," 1788, and the Hon. Lady Dorothea Ruggles Brise, who wrote a memoir on Crerar, says he is probably accountable for others in that collection. He is also credited with "Merry Lads of Inver (The)" and "Big Boat of Inver (The)," which were published by Almaine in a Collection of Dances early in the century. He was one of Niel Gow’s pupils.

Back to Bridge of Garry (The)