Find traditional instrumental music
This is the stable version, checked on 8 April 2020.
Jump to: navigation, search

BRILLIANCY. AKA- "Brilliance," "Brilliancy Medley." AKA and see "Liverpool Hornpipe (1)," "Louisville Hornpipe." See also related tunes "Drunken Billy Goat," "Miller's Reel," "Wake Up Susan." Old-Time, Texas Style. USA, west Texas. A Major. Standard tuning (fiddle). AABB (Christeson, Phillips/1994): AABBCC (Phillips/1995): AABBCCDDEE (Brody). John Hartford and others note that the first strain of "Passaic Hornpipe" is the same as this tune, as is "Trafalger Hornpipe" (the latter is cognate with the 'A' and 'C' parts of "Brilliancy"). Stacy Phillips remarks that the tune is a combination of "Passaic," "Trafalgar" and "Dew Drop" (the 'B' part) hornpipes. See also the related "Butterfly Hornpipe." There is some thought that "Brilliancy" was Eck Robertson's name for the set of variations he developed for "Drunken Billy Goat," although musicologist Charles Wolfe (1997) states that Robertson's piece is an amalgam of several fiddle tunes including "Drunken Billygoat" in combination with "Wake Up Susan (1)," "Old Billy Wilson" and "Bill Cheatum." Note there is a difference between the tunes that make up the first part of the tune, known as "Brilliancy" ("Billy Wilson (2)", "Drunken Billy Goat", "Wake Up Susan (1)"), and the extended piece known as "Brilliancy Medley" (with the addition of a different tune called "Billy Wilson (1)," and "Bill Cheatum"). "Brilliancy Medley" was one of Robertson's best known pieces and sold over 2,600 copies when it was released in September, 1930 (Wolfe, 1997). Harry Smith (Folkways FA2952, 1952) writes: "'Eck' Robertson was one of the pioneer rural recording artists, with unaccompanied solos issued by Victor thirty years ago. His playing in the present recording is quite archaic in its studied and exultant formality, but the medley of traditional tunes is more suited to the popular dance steps of the 1920's than for the square dance." 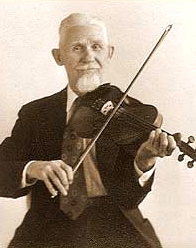