BRODIE HOUSE. Scottish, Reel. F Major. Standard tuning (fiddle). AB (Surenne): AABB (Marshall). Marshall attributes the tune to the Duke of Gordon (Alexander, the 4th Duke) in his Kinrara collection (1800). The Duke was an amateur musician and also wrote poetry; his song "Cauld Kail in Aberdeen (1)" was much admired by Robert Burns as an example of Scottish song in the old style. 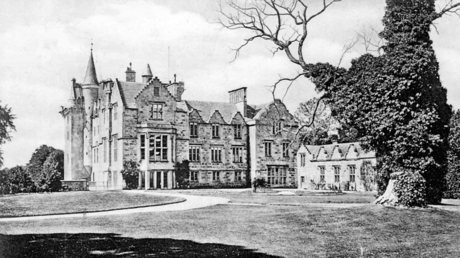 The beginnings of Brodie House, Moray, also called Brodie Castle, date from around 1560 and were probably initiated by Alexander Brodie of Brodie. Like many fortified structures it has undergone several modifications through the centuries. It was partially burned and razed by the Royalist army in 1645, but remodeled in 1730 by the 19th Brodie of Brodie. Although the building has been part of the Scottish National Trust since the 1970's (due to the expense of running it) and thus open to the public, the 25th Brodie of Brodie still guides some of the tours.