Find traditional instrumental music
This is the stable version, checked on 20 October 2020.
Jump to: navigation, search

Back to Brushy Run 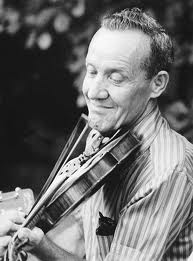 Wilson Douglas
BRUSHY RUN. American, Reel (cut time). USA, West Virginia. G Major. Standard (French Carpenter, Art Stamper) or DGdg (Harvey Sampson) tunings (fiddle). AB. Clay County, West Virginia, fiddler Wilson Douglas identifies the locale of this tune as "over beyond Widen. It was just a big holler, with so much underbrush--some old fiddler was bacheloring there and he just composed this and he called it the 'Brushy Run.' Just a bushy ravine, so to speak. (French) Carpenter (1899-1965) could really play that. Where these young fiddlers get lost is in the bowing over the high part. You do it with the bow. You don't do it with the notes at all!" (interview with Nancy McClellan). Douglas also said it was a Carpenter family tune composed some time around the time of the American Civil War. According to Kerry Blech, Ward Jarvis (W.Va., Ohio) learned the tune from eastern Kentucky fiddler Ed Haley, and that Jarvis played it in standard tuning. Douglas's and Ed Haley's versions are also nearly identical.

Back to Brushy Run