BUCKLEY'S JIG [2]. American, "Straight Jig" (2/4 time). A Major. Standard tuning (fiddle). AABB. This minstrel banjo tune was composed by G. Swaine Buckley (1829-1879), a member of the popular Buckley's Serenaders, who is described in the introduction to their Ethiopian Melodies as the troupe's "first tenor, 'light comedian', eccentric commedian and banjoist." The troupe consisted of several of the English-born Buckley brothers, headed by family scion James Buckley, and was a highly influential organization from the 1840's through the 1870's. In the 1850's they began to introduce burlesques or spoofs of opera into their performances, and subsequently introduced other entertainments, expanding their original minstrel roots into variety acts. English writer Charles Dickens took in one of the Buckley's performances during his trip to New York in 1861, and wrote: 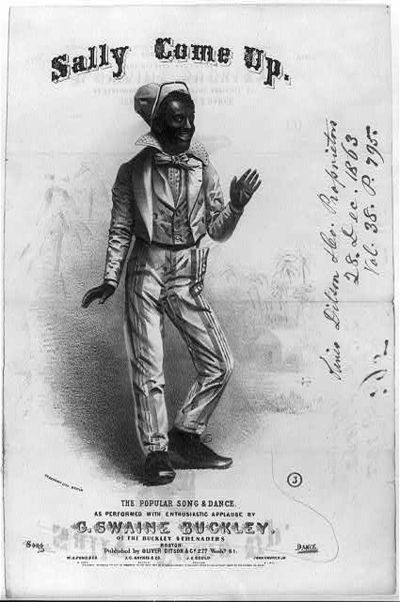 Wilkie and I . . . went to the Buckley's last night. They do the most preposterous things, in the way of Violin Solos, Deeply Sentimental Songs, and Lucrezia Borgia music, sung by a majestic female in black velvet and jewels with a blackened face! All that part of it, is intolerably bad. But the real N..... things are very good; and there is one man—the tambourine—who attempts to do things with chairs, in remembrance of an acrobat he has seen, which is the most genuinely ludicrous thing of its kind, I ever beheld. Nor have I ever seen so good a presentation as his, of the real Negro.