Find traditional instrumental music
This is the stable version, checked on 11 August 2021.
Jump to: navigation, search

BUFF AND BLUE [1], THE. English, Reel (cut time). G Major. Standard tuning (fiddle). AABBCC. 'Buff and Blue' were the colors of the Whig party in Britain; associated by Charles James Fox in Scotland in the late 18th century. Robert Burns referred to them in his song "Here's a Health to Them that's Awa":

The ladies, in their rage for Mr. Fox, have adopted a dress in compliment to him; it is to consist of a mixture of garter-blue and buff. These colors will be diversified according to the taste of the wearer: the body-part of some will be of blue, in the Mariborough stile, with a train of buff. Some will consist of a blue gown with a buff petticoat; and others be in entire buff, with blue ribbons. 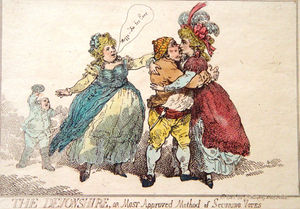 The Wikipede edits Buff and Blue.

Georgiana, Duchess of Devonshire, and her friend Frances Crewe wore buff and blue in electioneering for the Whigs, an activity that quickly produced condemnation from some quarters, as can be seen in the cartoon at left. Georgiana is being accused of trading kisses for votes, while Mrs. Crewe on the left, wearing buff and blue, cheers for Fox. She made a famous toast to the Whig politicians in 1784: "Buff and blue and all of you."

Source for notated version: The music manuscript collection of ship's fiddler William Litten, compiled 1800-1802, apparently while Litten was stationed aboard a vessel of the East India Fleet. The manuscript was brought to Martha's Vineyard, Massachusetts, after it had come into the hands of Allen Coffin of Edgartown, although how it came into his possession, and the fate of Litten are unknown.