Bug in the 'Tater

Find traditional instrumental music
This is the stable version, checked on 17 November 2019.
Jump to: navigation, search

Back to Bug in the 'Tater

BUG(S) IN THE 'TATER(S). AKA and see "Ragtime Annie (1)," "Sister Ann." American, Reel (cut time). D Major. Standard tuning (fiddle). ABCD: AA'BCC'DD'. "Bug in the Taters" was recorded for Brunswick Records in New York City in May, 1927, by Al Hopkins and His Buckle Busters, with fiddler Charlie Bowman who was credited on the label. The group's lineup changed from time to time (as did the name; they are also called The Hill Billies), but for this session it was Bowman and Elvis "Tony" Alderman on fiddles, Jack Reedy on banjo Elbert Bowman on guitar and John Hopkins on ukulele. Dance calls were vocalized by Al Hopkins. Only Bowman is credited on the label for this tune, but on the flip side, "Boatin' Up Sandy," both Bowman and Alderman are credited with the fiddling. 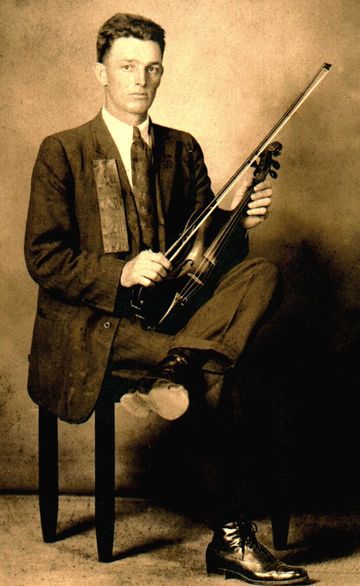 Charlie Bowman
Folklorist/musicologist Vance Randolph recorded the tune for the Library of Congress from Ozarks Mountains fiddlers in the early 1940's. The tune is similar to the old-time standard "Ragtime Annie (1)," particularly in the first strain. See also North Carolina Piedmont fiddler Bert Edwards' version of the tune as "Sister Ann."


See also listing at:
Hear the Hill Billies 1927 recording at Slippery Hill [1] and at youtube.com [2]
See another standard notation transcription [3]

Back to Bug in the 'Tater