Find traditional instrumental music
This is the stable version, checked on 5 July 2020.
Jump to: navigation, search

Back to Bury Fair

BURY FAIR. English, Country Dance Tune (2/2 time). F Major. Standard tuning (fiddle). ABCD (Sharp): AABBC (Barnes). "Bury Fair" first appears in the supplement to Henry Playford's Dancing Master, 9th edition (London, 1695). It appeared in all subsequent editions of the Dancing Master through the eighteenth and last, published in 1728. The Walsh's also printed it in their Compleat Country Dancing Master volumes of 1718, 1731 and 1754. In Dublin, it was printed by the Neales in 1726, albeit with a rfew alterations. The melody was used as the vehicle for songs in a number of ballad operas of the early 18th century, including Polly (1729), The Wedding (1729), The Devil of a Duke, or Trapolin's Vagaries (1732), The Fashionable Lady, or Harlequin's Opera (1730), and Sancho at Court, or the Mock Governor (1748). Manuscript versions can be found entered by Ernest August Jayme (1717) and William Woolball (c. 1720). It is one of the "lost tunes" of William Vickers' 1770 Northumbrian dance tune manuscript, and London musician Thomas Hammersley included it in his music copybook of c. 1790.

Frank Kidson thought "Bury Fair" probably related to the East Anglian town of Bury St. Edmonds, which rings true, as that is the setting in Thomas Shadwell's comedy Bury Fair, produced in 1689 featuring the country bumpkin character Oldwit who, in the final act of the play, cries:

Call in the Fiddlers: I am Transported! I am all Air! Sirrah, go you and set the Bells a-going in both Churches: Call in all my Neighbours, I'll have him hang'd that's Sober to Night; let every Room in my House Roar, that it may keep the whole Town awake. Here are the Fiddles: fall to Dancing presently; lose no time.

The play remained in in repertory at Drury Lane well into the 18th century. 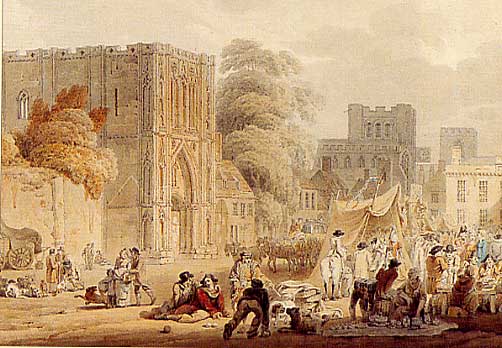 Bury St. Edmunds was a prosperous town in the 18th century, benefiting from a textile manufacturing base that was beginning to decline, but which had attracted a number of gentry to the area. It was a social center for the region. The town had not one, but three fashionable fairs yearly; the first on Easter Tuesday, the second for three days before the feast of St. Matthew and three days after, and the third on St. Edmunds Day, November the 20th. The St. Matthew's fair in particular was a time for extended festivities, lasting beyond the proscribed time of the fair, "for the diversion of the nobility and gentry that usually resort to it"

Back to Bury Fair