Back to Buxton Wells

Buxton [1] is a town in Derbyshire, England. Since Roman times it has been a resort town due to its geothermal springs. In the late 18th century it was developed as a spa town, similar to Bath, by the Dukes of Devonshire. Spring waters are pumped to St Ann's Well, adjacent to a shrine to St. Anne dating from medieval times, located near the town center. The custom of 'well-dressing' occurs each summer in Buxton. Jacqueline Simpson and Steve Roud [Oxford Dictionary of English Folklore, 2000] explain: 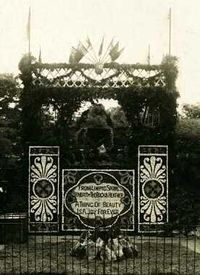 Dressing takes a similar form in most villages. A large (up to twelve feet long) shallow wooden tray is constructed, into which a base of smooth soft clay is packed. Elaborate pictures or patterns are made by pressing thousands of flower petals into the clay, plus other natural materials such as moss, stones, or shells. The trays are mounted vertically on scaffolding erected across, behind, or round the well. The pictures are most often biblical scenes, with an appropriate short text or caption, but other subjects can be represented and views of the local church used to be popular. Many have a single panel, others have two or three. [p. 385] 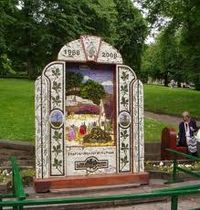 This elaborate decoration probably developed around the turn of the 19th century, note the authors, and grew out of the more informal, but ancient and widespread, custom of decorating wells wil ribbons and garlands.

Back to Buxton Wells