Back to Bye-Bye My Honey I'm Gone

BYE-BYE MY HONEY, I'M GONE. AKA and see "Goodbye My Honey I'm Gone." American, Song Air and Reel (cut time). D Major. Standard tuning (fiddle). AABB. "Bye Bye My Honey I'm Gone" was a "coon song" written in 1885 or 1886 by Virginia songwriter and journalist Monroe H. "Rosey" Rosenfeld (c. 1861-1918), the son of German immigrants and the man credited with coining the phrase "Tin Pan Alley" [1]. It was set to a schottische melody, with Rosenfeld's lines beginning: 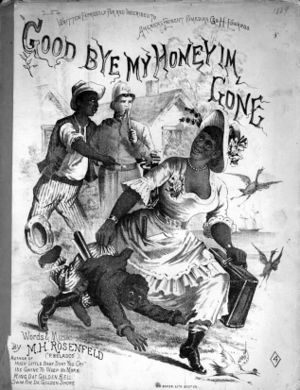 I had a girl, and her name was Isabella,
She ran away with another colored feller;
And my load was all the stronger,
And I couldn't stay no longer,
Goodbye, my honey, I'm gone.

One day in the middle of the month of Janu-year,
I rolled my dearie in my arms to sooth her,
But her heart was with another,
And she wouldn't let me love her,
Goodbye, my honey, I'm gone.

The song was recorded in the infant cylinder recording media in 1897 by comedian and singer Billy Golden, and the composition was adapted as a patriotic song in 1918, also with the title "Goodbye, My Honey, I'm Gone," with words and music credited to James Reese Europe, Noble Sissle and Eubie Blake.
In the next decade a successful recording of "Bye Bye, My Honey, I'm Gone" was released in 1929 by The Pickard Family, WSM Grand Ole Opry performers for thirty years from 1927 to the 1950's. The family band consisted of Obed "Dad" Pickard (Vocals Solo/Fiddle /Guitar/Banjo/Jew's Harp), Leila May "Little Mother" (Vcls/Piano) and children Ruth (Accordion), Bubb (Vcls/Guitar), Charlie (Vcls/Guitar) and Ann (Vcls/Guitar). There is a story that they came to the attention of the Opry founder and manager, Solemn Old Judge, George D. Hay, when one of the Pickard children went missing. The parents broadcast an appeal for help in finding the child (which was forthcoming, with a happy ending), but meanwhile it had come to Hay's attention that the family was musically inclined. He auditioned them and launched their careers. Later the Pickard family moved to WLS in Chicago to star on the National Barndance. However, their 1929 recorded song was somewhat different than the original in words and music, and had transitioned from the "coon song" genre to country music, set a bit faster with instrumental breaks(featuring Dad Pickard's jews harp). The Pickards sang: 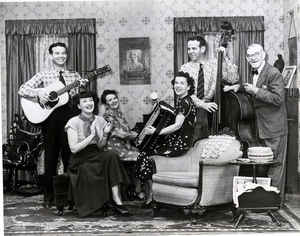 I had a gal, her name was Isabella,
She ran off with another yella fella;
Hollered for a copper, but he said he couldn't stop her,
And its, bye bye, my honey, I'm gone.

By the time Lotus Dickey recorded "Bye Bye My Honey, I'm Gone" in the late 1980's it had been transformed into a genuine old-time instrumental breakdown.


Printed sources : - Lotus Dickey (Indiana) [Phillips]. Dickey learned it from Albert & Effie Daugherty when he was in high school in Paoli, Indiana, c. 1931.

Back to Bye-Bye My Honey I'm Gone