CALEDONIAN HUNT [1], THE. AKA - "Caledonean Hunt," "Caledonian Hunt's Delight (2) (The)." AKA - "My Love is in the House." AKA and see "Moniemusk" [Bayard's No. 2]. Scottish; Strathspey or Fling. D Major (most versions): C Major (Harding). Standard tuning (fiddle). AB (most versions): AAB (Kerr, Petrie): AABB (Harding). Composed by Sir Alexander Don, 5th Baronet of Newton Don (1751-1815), who, in 1777 along with other local gentry, formed a Society called the Caledonian Hunt, which met twice a year. (See note for "Sir Alexander Don (1)" for more on him). The Cross Keys Hotel in Kelso (Borders region) was used as a base. A Yorkshire gentleman, Colonel Thornton, visited in 1786 and gave this account: 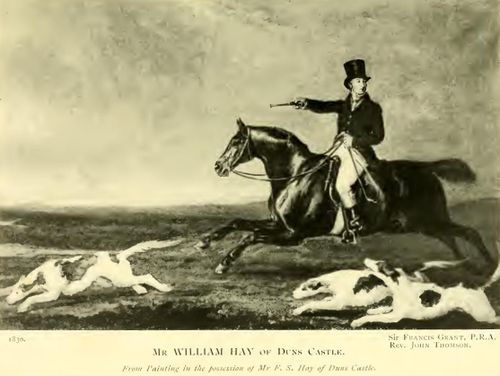 A charming scene of confusion; cooks, ladies' servants, waitresses all running against each other, being the time of Kelso Races. The company is composed of gentlemen of the Turf on both sides of the Tweed with families and friends and also members of the Caledonian Hunt. Foxhounds and harriers hunt alternately in the mornings. There is also a concert and races and next night the gentlemen of the Hunt give a handsome ball. After the ladies retired therefrom, the gentlemen formed a party to drink their healths and when I got up at 8 they were still drinking and meant to sit till hounds went out. This meeting, I heard, is most expensive of any. An English Steward was obliged to pay 10 guineas for his room, though only there 5 nights.

The annual event of the Caledonian Hunt was the famous Caledonian Hunt Ball, an event so fashionable as to be attended by the majority of gentry of Scotland, and not a few from England. Nathaniel Gow's band performed music for the occasion for many years, until music and dance fashions changed fashion. In 1822 King George IV attended the ball and took pleasure in expressing the satisfaction he derived from Gow's music. When Gow presented his bill to the sponsors of the event, he added, "...my own trouble at pleasure, or nothing, as his majesty's approbation more than recompensed me." At the end of his life, when Gow became infirm and financially destitute from the failure of his publishing business, the noblemen and gentlemen of the Hunt voted Gow 50 pounds per annum for the remainder of his years in remembrance of his services to them.

O'Neill (1922) remarks: "This favorite first appeared in Ross' Choice Collection of Scots Reels Country Dances and Strathspeys, Edinburgh, 1780." Donn's compsition appears in the c. 1785 music mansucript collection of John Sutherland, a pastoral piper from Aberdeenshire. The pastoral pipes were a precursor to the smallpipes. The melody is attibuted in the ms. to either "Our Alex Donn" or "Sir Alex Donn". The first strain is shared with the air and country dance tune "O This is no My Ain Lassie."