Back to Calico Corn

CALICO CORN. AKA - "Calico's Corn." American, Reel (2/4 time). D Major. Standard tuning (fiddle). AABB. The reel is sourced to Gilbert "Gib" Ingram (1893-1980), a farmer and fiddler from the Oakland, Illinois, area, who moved to Hindsboro later in life. When he was contacted by collectors Garry Harrison and Jo Burgess he had not played the fiddle for many years, but was willing to try to resume playing when asked. The authors write: "His style was a rhythmic one, and he mostly favored series of short bow strokes over slurs." Ingram was recorded in the field in Oakland in 1976. 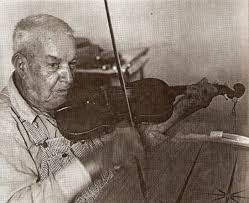 Calico corn is also known as Indian corn, and has kernels that have red, yellow, and brownish red striping and mottling.

Back to Calico Corn