Find traditional instrumental music
This is the stable version, checked on 4 January 2020.
Jump to: navigation, search

Back to Caller Herring

{{#multimediaitem:YouTube|oFtXrT5sxRk|CALLER HERRING}} AKA – "Culler Herren." Scottish, Slow Air (4/4 time). B Flat Major (Neil, Skye): C Major (Carlin): D Major (Anderson): E Flat Major (Martin): G Major (O'Farrell). Standard tuning (fiddle). AAB (Martin): ABC (O'Farrell): AABBCC (Anderson, Neil, Skye): AABBC (Carlin). The air is perhaps the best-known composition of Nathaniel Gow (1763–1831), the youngest son of Niel Gow and student of Scottish fiddlers Alexander "King" McGlashan and Robert Mackintosh. A well-known descriptive piece which has retained popularity to the present (though not nearly to the extent of pre-war {WWII} days), it is an attempt to imitate cries of Newhaven fish-women as they sold their wares, mingled with chiming of the bells of St. Andrew's Church, in George Street, Edinburgh. (George Street, late 18th century.) Gow originally scored the tune for harpsichord or pianoforte. Lady (Baroness) Nairne wrote a song to the tune which tells the story of the fishwives who sold fish caught overnight in the nearby Firth of Forth form door to door in the streets of the city of Edinburgh to both rich and poor. They carried the fish on their backs in large baskets or creels, braced with a leather strap which wound around their foreheads, and "were famous, not only for their characteristic 'singing cries' but also for their personality and salesmanship" (Neil, 1991). Poet Robert Tannahill wrote a comic song called "Caller Herrin" to the air of "Cameronian Rant (The)" in 1808. A sea shanty, "Haul Away the Bowline," is sung to this tune. 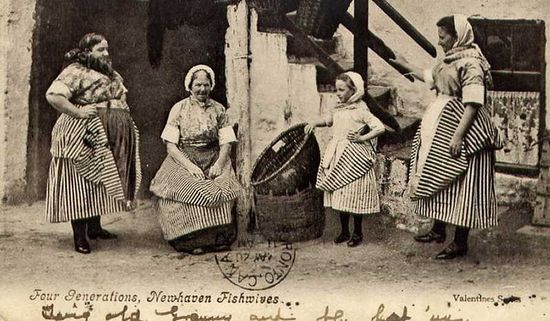 When ye were sleepin' on your pillows,
Dream'd ye aught o' our puir fellows,
Darkling as they fac'd the billows,
A' to fill the woven willows?
Buy my caller herrin',
New drawn frae the Forth.

Chorus:
When the creel o' herrin' passes,
Ladies-clad in silks and laces,
Gather in their braw pelisses,
Cast their heads and screw their faces,

Chorus:
Neebour wives, now tent my tellin';
When the bonnie fish ye're selling',
At ae word be in yere dealin' -
Truth will stand when a' thin's failing'.

Gow was not the first to find musical inspiration in the cries of street vendors. See also Thomas D'Urfey's "Trader's Medley, or Cries of London" in his Pills to Purge Melancholy (1719–20) and James Oswald's "Cries of Edinburgh (The)" (1760).

In America, the tune was published with country dance directions in G. Graupner's Cotillions and Country Dances No. 2 [1] (Boston, 1808) and John Paff's Gentlemen's Amusement No. 2 (New York, 1812).

Back to Caller Herring