Back to Camp Nelson Blues

CAMP NELSON BLUES. American, Country Blues Tune (cut time). C Major. Standard tuning (fiddle). One part. The piece was recorded by the Booker Orchestra, comprising African-American fiddler Jim Booker (1872-1940) and his two brothers. Booker recorded two classic sides with Taylor's Kentucky Boys (Tom Carter, 1975), making them one of the first inter-racial string bands to be recorded. The Booker Orchestra recorded "Camp Nelson Blues" in August, 1927, in Richmond, Indiana, for Gennett Records, and consisted at that time of Jim Booker on fiddle, John and Joe playing guitar and fiddle (which one played which on the recording is unknown), and Robert Steele on kazoo. 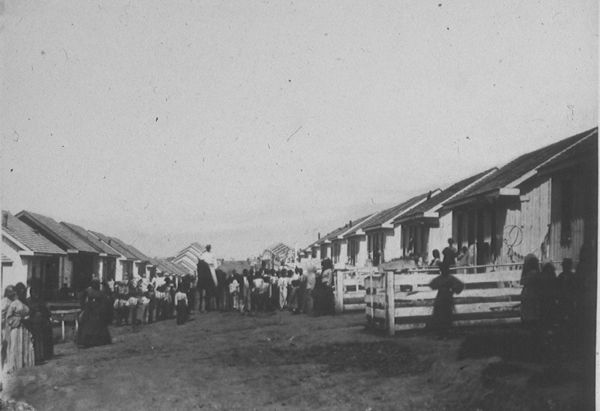 Camp Nelson was located in Jessamine County, central Kentucky (just south of Louisville), and was a training and staging camp for African-American troops fighting for the Union in the Civil War. Some ten thousand soldiers and their families cycled through the camp during the was years, and, in 1964 it became Kentucky's largest (and the the nation's third largest) recruitment center for African-American soldiers. By wars end eight United States Colored Troop regiments were organized there and saw action in Kentucky and Virginia. During the last years of the conflict, after Emancipation, Camp Booker was also a refuge camp for runaway slaves. The Booker Brothers' parents, Sarah and James (Jim Sr.), were runaways who lived in Camp Nelson and where they raised their sons, Jim, John (1892-1986) and Joe (1890-1966) [1].

"Camp Nelson Blues" was also in the repertory of Lexington, Kentucky, fiddler John Masters (1904-1986), a left-handed fiddler who played many tunes he learned from Jim Booker.

Back to Camp Nelson Blues