Find traditional instrumental music
This is the stable version, checked on 15 September 2019.
Jump to: navigation, search

Back to Captain Jinks

CAPTAIN JINKS/JINX. AKA and see "Down the Ohio," "Gigue du Violoneux," "Reel du violoneux (Le)." American (originally), Canadian; Single Jig and Air. USA; Pa., New York State: Canada, Ottawa Valley. G Major (Bronner, Ford, Guntharp, S. Johnson, Roche, Shaw): D Major (Bayard, Begin, Phillips, Sweet). Standard tuning (fiddle). AB (Begin, Shaw, Sweet): AAB (Guntharp, Phillips): ABB (Bayard): AABA (S. Johnson): AABB (Bronner, Ford, Roche). The title is taken from a popular song of the 19th century, "Captain Jinks of the Horse Marines," which Sigmund Spaeth (A History of Popular Music in America) states was composed by an English music hall singer named William Horace Lingard who had emigrated to America. Lingard was the manager of Wood's Theatre in New York City..."a protean man who was an accomplished female impersonator, the lyricist for 'Captain Jinks of the Horse Marines', and, in 1867, the much acclaimed renderer of Lingard's Great Statue Song, a quick-change routine in which, with only a few seconds' pause between metamorphoses, he transformed himself from Mayor John T. Hoffman to Governor Horatio Seymour to Horace Greeley to Benjamin F. Butler to Ulysses S. Grant to President Andrew Johnson." (E. J. Khan, The Merry Partners: the Age and Stage of Harrigan & Hart, 1955, p. 152). Confirming that Lingard wrote the lyrics, Denes Agay (Best Loved Songs of the American People, pp. 156-157) however, credits the music to a T. Maclagan. In another volume (Reed 'Em and Weep, 1927, p. 63) Spaeth refers to a play called Captain Jinks in which Ethel Barrymore made her debut as a star in 1901.

Musicologist Sam Bayard (1991) traces the tune "ultimately (and indirectly)" back to a piece called "The Mill Mill O," a commonly printed and played duple time march from the 18th and early 19th centuries, and to the jig "Merrily Danced the Quaker('s Wife)," one of which was derived from the other. Another researcher cited by Bayard traces the melodic material in these tunes all the way back to 14th century plain-chant, although Bayard himself does not confirm or deny that line of thinking. He does believe that the mid-19th century tune known as "Captain Jinks" (and also the melody "Hundred Pipers") is an offshoot of the first part of the Mill air, via "The Quaker's Wife." It was listed as having been commonly played in the Orange County, N.Y. area for dances in the 1930's (Lettie Osborn, New York Folklore Quarterly, pp. 211-215), about the same time Bayard collected the melody from western Pennsylvania sources, and Norman Cazden collected it from Catskill Mountian, N.Y. dances of the era. See also Québec fiddler Joseph Allard's derivative version, "Gigue du Violoneux," and J.O. LaMadeleine's "Quadrille de Matane Figure 5," which is relatively faithful to the original albeit slightly "crooked" (irregular metre) in the first strain. The original words to the song begin: 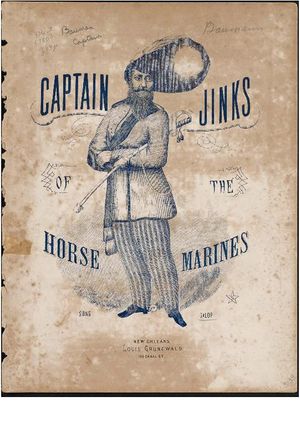 I'm Captain Jinks of the Horse Marines,
I feed my horse on corn and beans,
And often live beyond my means,
Tho a captain in the army.

Bronner (1987) notes that the lyrics reinforce the tune's connection to dancing:

A tune was much sung by de white folks on de place and took wid de niggers. It went lak dis:

Vance Randolph (Ozark Folksongs, vol. 3, 1946) prints play-party instructions and a song text for "Captain Jinks," collected in 1930 from an informant in Pineville, Missouri. He also cites several publications from the first half of the 20th century that contain American play-party versions of the song and tune.

Back to Captain Jinks