Back to Captain Kelly's Reel (1)

CAPTAIN KELLY('S)/KELLEY REEL [1] (Cor an Taoisig Ui Ceallaig). AKA and see "Indian on the Rock (2)." Irish, Reel. G Major (Cole, Kerr/Vol. 2, O'Neill {4 editions}): D Major (McDermott, Kerr/vol. 4). Standard tuning (fiddle). AB (Allan's, O'Neill/1001, 1915 & 1850): ABB (Cole): ABB' (O'Neill/Krassen): AABB (Kerr/vol. 2): AABB' (Kerr/vol. 4). The Captain was an illustrious 19th century piper of County Kildare, who was given a set of ebony, silver-mounted pipes by King George IV after he played before the visiting monarch. The musician engraved his name and the year 1809 on the stock. William Kelly (d. 1858) was called 'Sporting' Captain Kelly due to his love and support of sporting events; he once trained a championship boxer and kept a stable of racehorses, several of whom he named after parts of the pipes, such as "Chanter," "Drone" etc. (O'Neill, 1913). The tune appears in the large mid-19th century music manuscript collection of County Cork cleric and uilleann piper Canon James Goodman under the title “Captain Kelly's Reel.” See also the more-or-less similar reels "Over the Bog Road," "John Cawley's," "Monsignor's Blessing" and "Humors of Newcastle (The)." The reel was recorded in the 78 RPM era by County Sligo/New York fiddler James "Professor" Morrison, and by Leitrim flute player Charlie Higgins.

Captain Francis O'Neill has biographical and graphic sketches of him in Irish Minstrels and Musicians (1913, p. 184). 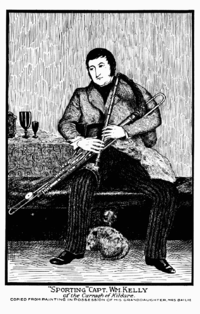 No book on pipers and pipering would be complete without an account of Capt. Williarn Kelly, the great County Kildare piper, who was born in New Abbey House, County Kildare, early in the last quarter of the eighteenth century. He played before King George IV when that monarch visited Ireland, and was presented with a set of pipes – ebony, silver-mounted – which is shown to visitors at Kilkea Castle, Maganey, County Kildare. After his death, his widow gave this set of bagpipes to a Mrs. Bailey, of Newtown Bert, near Athy, whose son, Samuel Bailey, was also a famous piper. The latter, after playing on them for years, died in August, 1895, and two years later the historical instrument was obtained from his daughter, Mary, and is now at Kilkea Castle, as before stated.

Round the stock is engraved “William Kelly, Esq., 1809.” “Sporting” Captain Kelly, as our hero was affectionately called, typifies the best qualities of his race, with few or none of its failings; and as a man of his prominence and parts deserved much more than the recognition which current history accords him, we have deviated from our main subject in order to make partial amends in that respect. Not the least of- Captain Kelly’s claims to the veneration of Kildare people is the circumstance that he trained Dan Donnelly, the boxer, for his contest with Cooper, the Englishman, champion pugilist of his time. Donnelly was born in Townsend Street, Dublin, and on one occasion Captain Kelly saw the yet untrained man dispose with a single box each of three bullies who had set upon him. The sporting gentleman at once recognized Donnelly’s powers and undertook to develop them, with the result we have all heard of, both in poetry and prose. Captain Kelly was well known on the turf; for many years he kept a racing establishment at Madrlenstown Mansions, Curragh, and named several of his horses after parts of the pipes, as “Chanter,” “Drone,” etc.

Drone was a particularly fine gray horse, and his successes are recorded in the Racing Calendars of the period. Captain Kelly had several proteges among the pipers of his time, one of the most distinguished being John Hicks, who left his native country for Liverpool and eventually made his way to New York, Chicago and other American cities.

Back to Captain Kelly's Reel (1)