CAPTAIN MAITLAND'S. AKA and see "Honorable Captain Maitland's." Scottish, Strathspey. G Major. Standard tuning (fiddle). AAB. Composed by Nathaniel Gow (1763-1831), and is another of his compositions dedicated to Scottish Napoleonic-era naval heros. Captain Frederick Lewis Maitland [1] (1777-1839) of Lindores House, Fife, commanded the HMS Bellerophon, when on July 15th, 1815, Napoleon surrendered to him at Rochefort. Maitland's Napoleonic duties were primarily as a fighting frigate captain, but his successful career enabled him to purchase the estate of Lindores. He died of a fever in India, however, where he had been appointed commander-in-chief of the East Indies station, attaining the rank of Rear Admiral. Compare the strathspey with Islay fiddler-composer Alexander Mackay's "North Highland Reel (2) (A)." See also the 6/8 version of the tune in O'Neill's Music of Ireland (1903) as "Ellis' Jig." 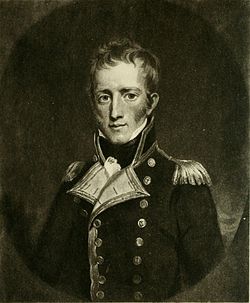