Back to Carrick Hornpipe (The)

CARRICK HORNPIPE, THE. English, Hornpipe. England, Northumberland. Composed by Northumbrian piper Billy Pigg (1902-1968) born in Dilston Park, in honor of his friend and playing partner, John Armstrong of Carrick (1929- c.1980). 'Carrick' in his name refers to High Carrick, his hill farm on the edge of the Otterburn Army ranges, near Elsdon, Northumberland. Pigg and Armstrong, along with Armstrong's sister Annie Snaith, and, in 1938, Archie Dagg, played as the group The Border Minstrels. 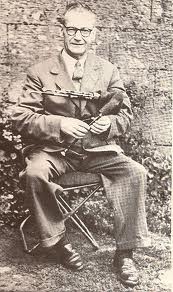 Back to Carrick Hornpipe (The)