Cat Came Back (And the)

Find traditional instrumental music
This is the stable version, checked on 4 July 2022.
Jump to: navigation, search

Back to Cat Came Back (And the)

(AND THE) CAT CAME BACK. American, Reel (2/4 or cut time). G Major. Standard tuning (fiddle). AABB (Devil's Box). Christeson (1973) notes: "Played by a few Missouri fiddlers in ... the early 1930's but is seldom heard any more." The tune was actually a Tin-Pan-Alley song from Christmas, 1893, written by prolific songwriter Harry S. Miller and popularized by New York entertainer and Broadway impresario Tony Pastor. The song entered folk tradition and there are numerous verses and variations of the lyric, but the stable chorus goes: 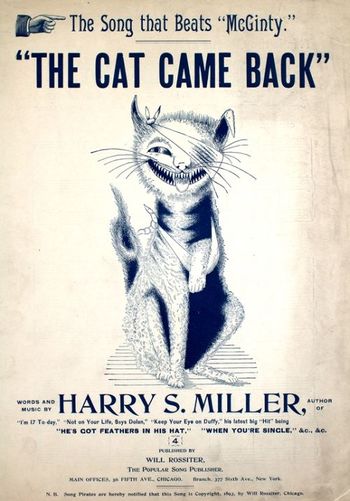 It was popularized among country musicians in the early 78 RPM era through recordings by north Georgia's Fiddlin' John Carson and Riley Puckett, and by Kentucky's Fiddlin' Doc Roberts. It was later recorded by fiddler Tommy Jackson (musician), and (late in his career) Clark Kessinger.

Back to Cat Came Back (And the)