Back to Change Alley

CHANGE ALLEY. AKA and see "Back of the Change House," "Cadger o' Crieff (The)," Cuckold's Song," "Hame Cam Oor Gude Man." Scottish, English; Country Dance Tune (cut time). D Major. Standard tuning (fiddle). AABB. Change Alley [1] was originally called Exchange Alley and was located not far from the Royal Exchange. It provided a convenient shortcut from there to the Post Office. Change Alley was the location of several famous London coffeehouses, including Garraways (open 1656 to 1872, frequented by merchants and medical men) and its next-door neighbor, Jonathan's (open from 1667 to 1777, patronized by Stock-jobbers, and also astronomers, including Edmund Halley {Halley's Comet} and Robert Hooke). 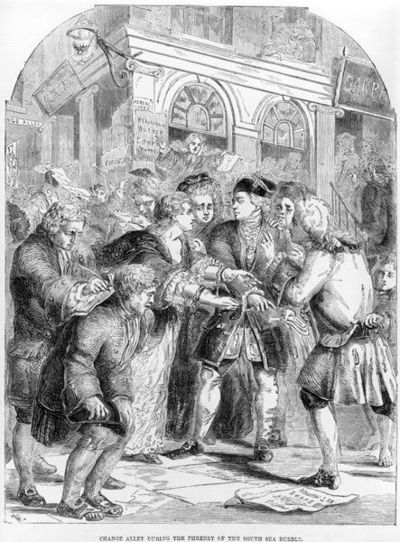 Change Alley during the frenzy of the South Sea Bubble

The tune is older than its printing in Preston's 1800 collection, having been included in Scottish musician David Young's 1734 manuscript called The Drummond Castle Manuscript or 'The Duke of Perth Manuscript, for whom Young compiled it. Young's title was "Cadger o' Crieff (The)." See note for "Back of the Change House" for more.

Back to Change Alley