Back to Cheshire Rounds (1)[edit]

There are many variations of this popular and widespread melody. Pete Stewart, in his article "The Triple Time Hornpipe from 1550 to 1800" says: "Indeed, some actors became renowned for particular dances; George Daniel in his Merrie England in the olden time mentions in particular the actor Thomas Doggett (c. 1640-1721) who was probably responsible for the popularity of the Cheshire Rounds (see p. 68)." The Cheshire Rounds was a once-popular dance, and a precursor to the English hornpipe. Graham Christian (2015, p. 16) remarks: "The tune is almost the locus classicus of the 'Lancashire' or 'English' hornpipe in its early form, with its four-bar phrases and syncopations, and was likely already in use for solo dances. By the early 1700's, "Cheshire Rounds" had become a byword for hearty and even 'rough' dance, rather as "Trenchmore" had been in the previous generation." In Memorials of Old Cheshire (1910) it was recorded: 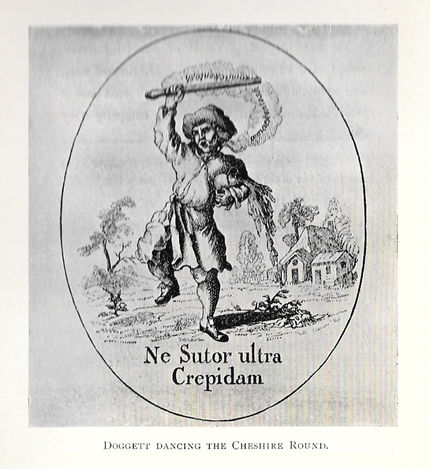 "Cheshire Rounds" was a celebrated tune and dance sometimes danced by a couple (whose gyrations resembled the movements of the sun and moon) and sometimes by a single person. The only known portrait of Doggett (who founded the celebrated waterman's badge) shows him dancing the "Cheshire Round."

In Bartholomew Fiar, at the Coach-house on the pav'd stones at Hosier-Lane end, you will see a Black that dances the Cheshire Rounds to the admiration of all spectators." (Play-bill by Dogget, 1691. In fact, the only known portrait of Dogget shows him dancing the Cheshire Round.)

John Sleepe now keeps the Whelp and Bacon in Smithfield Rounds, where are to be seen a young lad that dances a Cheshire Round to the admiration of all people." (Playbill)

Back to Cheshire Rounds (1)[edit]