Find traditional instrumental music
This is the stable version, checked on 4 May 2020.
Jump to: navigation, search

Back to Cheslatta Lake Rag 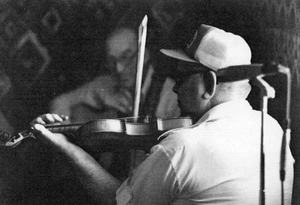 CHESLATTA LAKE RAG. Canadian, Country Rag (cut time). D Major. Standard tuning (fiddle). AA'BA'. "Composed by Max Sexsmith during 1963 and 1964. It is in the style of early 20th century dance hits that are now accepted in the old-time repertory. The tune is based on the tonic, dominant, and subdominant triads of the major mode, the harmonic basis of old-time music. The syncopated rhythm has jazz roots." (Gibbons)

Back to Cheslatta Lake Rag