Find traditional instrumental music
This is the stable version, checked on 7 July 2020.
Jump to: navigation, search

Back to Choctaw Waltz 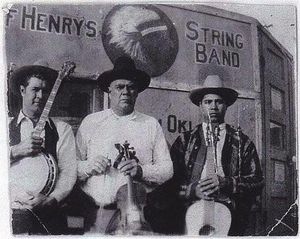 Big Chief Henry's Indian String Band
CHOCTAW WALTZ. American, Waltz (3/4 time). G Major. Standard tuning (fiddle). One part. Big Chief Henry's Indian String Band was the name of the group formed by members of the Hall family: Henry, father, on vocals and fiddle; and sons Clarence on guitar and Harold on banjo. They were Choctaw Indians from Oklahoma, and may have played from a base in Wichita, Kansas, from which they toured Oklahoma and the southeast, and occasionally more distant places, at venues such as county fairs, barrooms, medicine shows and the like. They were 'discovered' at the Mississippi Choctaw Indian Fair at Philadelphia, Mississippi, by H. C. Speir, a music promoter from Jackson, who had them sign with Victor records for six sides, recorded in 1929 in Dallas, Texas. Spier, a businessman who owned a record store in Jackson's predominantly black commercial district, had the entrepreneurial insight to realize that there were a wealth of African-American musicians in his region, and was responsible for signing Robert Johnson, Charlie Patton, Son House, Skip James, the Mississippi Sheiks, and many others to recording contracts (he would record them on aluminum disc records, send them off to various record companies, and negotiated contracts). However, Spier enjoyed white fiddle music as well, and was enthusiastic about Henry Hall's family group. North Carolina banjo player, singer and recording artist Charlie Poole also enjoyed their recordings and opined that they were among his favorites. With the depression and the lack of work, the family moved to the Pacific northwest, where they worked at carpentry[1].

Back to Choctaw Waltz